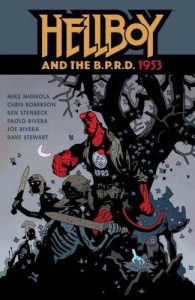 Men and women are the products of their histories, and Mike Mignola (joined this time by Chris Roberson) sheds a little more light on Big Red’s story in 1953 as he continues to explore Hellboy’s exploits during his formative years with in the B.P.R.D. in the nineteen fifties. The first half of the book is composed of a series of short, snappy, deliciously dark and -more often than not – morbidly funny twist in their tail, ghost stories. The Phantom Hand, Rawhead and Bloody Bones, The Witch Tree and The Kelpie cover the short “break” that Hellboy  and Professor Broome took in the UK in the early part of 1953, a vacation during which our heroes fall foul of possessed body parts, millennia old witches, cursed pubs and Highland horrors. Told in typical, tried, tested and true Hellboy fashion, each brings a stygian smile to your face as the things from beyond the veil come face-to-face with the vessel of their demise and while the tales are brief, the superlative writing and dialogue reveal the Professor’s hidden concerns and questions about his ward, while at the same time delivering a plethora of supernatural shocks.

Then in the latter half of 1953, Hellboy returns to the US of A. Back in the saddle with the B.P.R.D., he tackles the ghosts of long dead Chinese miners in Wandering Souls and becomes entangled in the affairs of his communist opposites,  and battles mutated pets while attempting to solve a case that seemingly revolves around missing children, in Beyond the Fences. The former is a good old fashioned Hellboy spook story, while the latter pulls back the curtain on fifties suburbia and takes a peek at some of the more abstruse and secretive depths of its inhabitants. Its punchy plot flips the idea of the all American hero on its head casting Big Red in that role while the ex-serviceman he partners with embodies all of the petty bigoted ideas of the era, while the teams resident psychic,  through a series of increasingly vivid visions, reveals that they’re only just beginning to scratch the surface of what’s really going on and that much bigger and uglier fights lie in all of their futures. Wonderfully written and flawlessly illustrated, with Stenbeck, Walsh and Rivera capturing all of the pulp wonder, noir and horror of the stories perfectly, 1953 is another triumphant entry in the annals of the men and women of the B.P.R.D. and their most famous investigator, the crimson demon who’s here to either save humanity or doom it to eternity of damnation. Welcome to 1953, it’s one hell of a good year… Tim Cundle