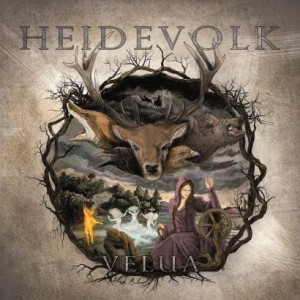 Heidevolk – Velua (Napalm)
‘Velua’, or Veluwe in Dutch, is one of the three major regions of Gelderland, the province which has brought forth Heidevolk. Veluwe is also the biggest forest/ woodland of the country. Just like most forests it has a mythical appeal to people. It is also a place for natural resources, which has often led to bloody wars in the past. The entire history of this region has been immortalised on ‘Velua’. Muscular metal, firmly rooted in paganism, singing about all that dwells among the mighty trees. When you compare ‘Velua’ to older releases you get the feeling the band has improved their manner of story­telling. The band already took this direction on ‘Batavi’, but it wasn’t this obivious back then. It used to be a bit more about separate, chapters, or battle hymns if you will, but on ‘Velua’ consistency is the keyword. Songs are serious, deal about what really interests the guys, and carry a lot more emotion, not in the least due to the added strings. It’s not all about war cries for axe­wielding tribes, but about people who truly care about, and live and die on the land they inhabit. Martijn Welzen