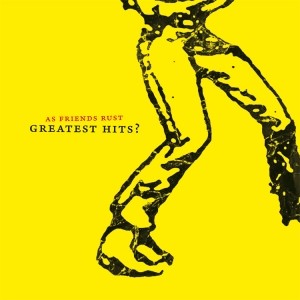 As Friends Rust – Greatest Hits? (Shield)
The question mark in the title says a lot. As Friends Rust never had any true hits, but we are talking about great songs and overall fan favourites. This 14 track record is actually a follow up to ‘Eleven Songs’ (Golf Records 2011), where a couple of songs have been switched and a few added to make it an even 14. What remains is the fresh approach of this punkrock / emo / hardcore mix with Damien Moyal’s great way of deliverance. It makes you look back fondly to the mid 90s when this band was working their asses off, and playing more shows than humanly possible. It’s just strange to think about the relatively short list of releases As Friends Rust have, as they were all over the place then. It would have been cool in that aspect if this would not be a cross section, but a complete discography. No reason to get too disappointed though, as ‘Greatest Hits?’ is a must have, also available on coloured vinyl AND the band will be hitting the stage of Groezrock 2015. I’m there! Martijn Welzen