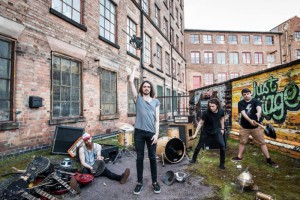 2015 was a difficult year for HECK. Having cemented their reputation as Baby Godzilla since 2012, with a deserved notoriety for redefining the word havoc, their live performances a ballistic barrage of flaying limbs and hurled instruments, out of nowhere came the news that the Japanese cinema giant were legally forcing them to change their name. Whilst this caused no end of grief for the Nottingham based chaos-quartet, delaying the release of their much anticipated debut album, it did not, and nothing will, stop them.

October of this year saw the release of ‘The Breakers’ single, the first new music under the new handle. A barrage of monstrously heavy riffs and wild-eyed energy, it firmly stated that although the name had changed, the mission was the same and now HECK are primed and ready to take 2016 by storm with the release of their debut album and a tour across the UK in March.

“After being held back for most of 2015 this tour is about us being let loose”, states guitarist Jonny Hall. “Bigger, brasher, louder than ever, everything gets stepped up. New songs, new setup, new danger.”

Watch HECK do damage at the following dates in March 2016.

The debut HECK album to be released in 2016 through NPAG Industries.