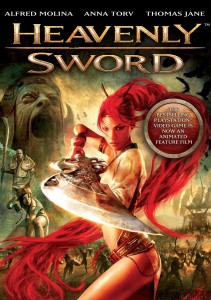 Heavenly Sword (TriCoast)
There’s no way around this and there’s no just way hide it any more. The truth was bound to come out at some point, so it might as well be now. Deep breaths, inhale, exhale, beginning the countdown and okay, here goes, and I’m ready… I don’t play video games. I don’t own a PlayStation, Xbox, Cuboid thing or whatever the hell it is they’re called, wouldn’t know where to begin with the whole online MMORPG thing and the last time I did play an arcade game, it was ‘Dragon’s Lair’ and it cost ten pence to have a go. So, I think it’s safe to say that I’m a little out of the loop as far as that world is concerned, and didn’t have a clue that ‘Heavenly Sword’ was based on a popular gaming franchise until the credits began to roll and the penny finally dropped when the words ‘based on the PlayStation game’ flashed across the screen. Which meant that when ‘Heavenly Sword’ began, I had no preconceptions of what to expect, no idea what the story entailed and was absolutely unaware of any of its associated mythology, canonicity or history. I was a blank canvas, and that’s probably why I kind of enjoyed it.

I say kind of, because as a newbie to ‘Heavenly Sword’ I fell victim to the inevitable exposition and information “dump” that always plays a part in bringing the unfamiliar up to speed with the already established plot points, but once that subsided and the action began (in spectacular fashion I might add), I found myself rooting for the -at first standoffish and arrogant- heroine of the piece, Nariko. Charged with finding a host worthy to wield the legendary blade known as the Heavenly Sword, a weapon her clan have ben protecting for generations, Nariko set out to complete her mission when her home, and that of her clan, is attacked by a power crazed King intent on seizing the weapon for himself. From that point on, ‘Heavenly Sword’ is a furious combination of insane action in a feudal Japan meets Lord of The Rings setting and a plot involving family secrets, betrayal, redemption and the inevitable revelations that await Nariko on her quest. If ‘Heavenly Sword’ had been animated in the same way as the best anime films, it would have been a mind-blowing spectacle, but as its computer animated and looks, and feels like a video game (or at least what I’ve seen of video games) and as such loses some of its emotional core, as it’s a little too cold and slick for my personal taste. But hey, that’s just me, and as I said, I don’t do the whole video game thing, so what do I know about it anyway, right? It’s not great, but it is good. And that makes it worthy of a couple of hours of anyone’s time… Tim Mass Movement