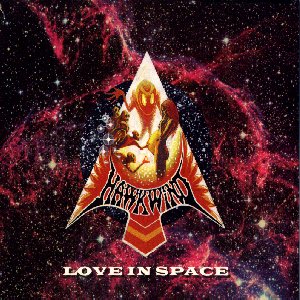 Hawkwind – Love In Space CD (Atomhenge/Cherry Red)
This is a ‘trip’ down memory lane… in more than one term of intention. Originally recorded in the mid 90’s on Hawkwind’s ‘Alien 4’ tour it’s a gargantuan package of pure, powerful, space rock and psychedelia. Kicking off with a suitably addressed extraterrestrial spoken word intro the atmospherics are instantaneously set; paving the way for the tide wave of aura which ‘Death Trap’ spews from the speakers. Hold on tight – this is going to be one cosmic cruise! The sound is clean, the set listing isn’t predictable (thankfully), and you know whatever guise of musicians is within the line up at the time Hawkwind always delivers what you would expect. This time featuring the rather charismatic and compelling frontman Ron Tree on vocals, backed by Alan Davey, Richard Chadwick, and obviously Dave Brock this is nothing short of a solid space rock set. Sprinkled with tripped out soundscapes and sonically induced tones the likes of ‘Sputnik Stan’ and ‘Robot’ will have you levitating in no time at all. This two disc set features a seventeen song show along with three bonus tracks (all be it two live versions) and a special Zeus B Held mix of the album title track – not essential but nice extras. Backed with a bumper sixteen page booklet, crammed with factual liner notes and plenty of time relevant photographs ‘Love In Space’ is one of the classic Hawkwind live albums alongside ‘Space Ritual’ and ‘Live ’79’ without a doubt. Mark Freebase