MM: ‘Proliferation’ is pretty potent wording, what’s the story and ideas behind the album title then?
Andrew: It conjures up images of what a lot of the album is about, the proliferation of the human race, the proliferation of nuclear war heads, and proliferation of a virus. It also seemed like a good way to follow up the first album “Origin”. Origin, Proliferation, what comes next? Any hard-core microbiology nerds should know the answer to that, everyone else will have to wait for album 3 [laughs].

MM: How did you forge the sound of Harlott, the way the band has headed?
Andrew: We spent some time when we started experimenting with different genres, all metal of course, until we started to head in a strictly thrash direction. We drew from the music we loved and started writing our own hook driven thrash metal that was all about speed and aggression, as well as the occasional delicious melody and fist pumping chorus. 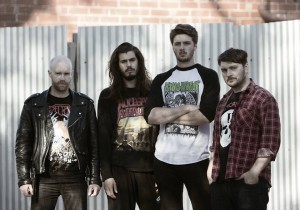 MM: How important is metal, or thrash to you guys as individuals?
Andrew: Metal is one of those things that tends to grab on to you and refuse to let go. We all got into it at a young age, Tim’s old enough to have actually lived a bit through the 80’s, but regardless of how we came across it, it has stuck with us. It’s what we’ve been doing for a while now, and it’s weird to think that we’re starting to make any sort of mark on the global scene, it was always just a bit of fun and a good way of letting out any excess energy.

MM: Does the album artwork tell a story?
Andrew: The art really ties in with the lyrics from the title track. It pretty much covers all of the themes that are important in that song and the album in general. War and greed, slavery and death, all of the calling cards of the human condition. We worked with Andrei Bouzikov, who has done some awesome work with Toxic Holocaust and the like, and he helped come up with the idea and put together a pretty wicked image for us. We had ideas before for different designs, but Metal Blade did not get behind them. In fact no one really got behind them. Turns out we have very specific artistic limits.

MM: How important is this in tying down the bands identity and sound?
Andrew: Well the artwork came together and suited the logo, and the logo suits the music, so on the whole, it’s a pretty fantastic album cover in as much as it captures what kind of band we are, and gives you a good clue of what to expect. The image itself places us firmly into a genre, but that genre is what we are all about, and there’s nothing wrong with wearing your heart on your sleeve, or your gimmick on your album cover. 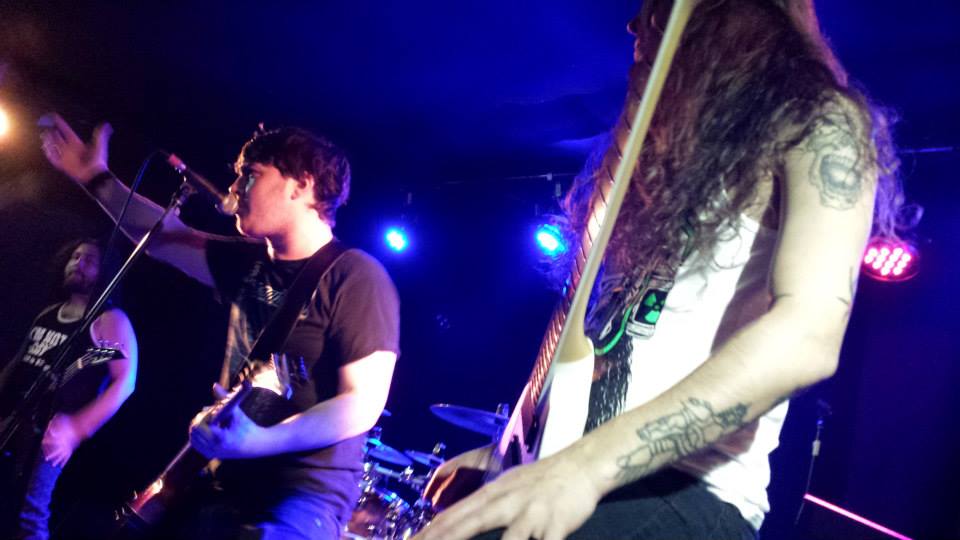 MM: Do you think it helps or hinders a band to be put into ‘genre’ or is it a good way to gain people’s interest? How has this worked for Harlott?
Andrew: Genres exist because variation exists. People call us a thrash band and make the comparison to Slayer. But there are worse things that you can be compared to and let’s face it… we are just ripping off Slayer… If people want to listen to a certain type of music, it makes their job a lot easier knowing that many other bands can be defined to be similar to what they already know they love. Sure, they might miss out on some absolute gems, but there’s too many fucking awesome bands in the world anyway. It’s good to know that people might discover us due to pigeon holing; we try to not to concern ourselves with the people who miss out.

MM: You guys have a European tour coming up soon, with Annihilator… you must be pretty stoked about this surely?
Andrew: 34 shows in 17 countries! Dream come true for a shitty little band from the colonies! We’re very much looking to playing in front of a European audience and seeing what they think of what we do. Hopefully we’ll make some new fans and sell some records, Metal Blade will be pissed off if we don’t…
Any exposure is good exposure for an Aussie band; we don’t really have much of a population down here. Awesome scene, very loyal and passionate, but it’s always the dream to hit the world stage.

MM: How do you think the pairing of Annihilator’s sound and Harlott’s sound sits together?
Andrew: We like to think there’s enough of a difference between us that people won’t get bored, but there’s also enough in common that Annihilator fans will enjoy what we bring to the party. They’ve definitely got a very refined sound in their later stuff, and if we were half the musicians they were, we would be joining them on that endeavour, but we share a lot of our sound with them, if that makes sense, so it should be an awesome tour!

MM: How much have you guys drawn from old school ideas?
Andrew: We grew up on the old stuff, but we also listen to what a lot of those bands are doing now, and what a lot of new bands are doing, and it’s important for us to stay up to date with our music and our sound. Production wise, it’s got to sound clean, but you never want to over-do it. If you over polish thrash, you lose all of the energy. Record everything with the best gear you can get your hands on, but keep it raw and keep it angry. And the image? Well if you see us live, you’re going to realise pretty quickly that image isn’t that important to us. We only have 1 guy with long hair, disgraceful isn’t it? [laughs]. 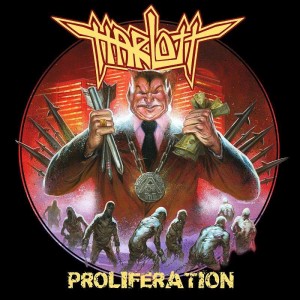 MM: Would you talk us through the songs on the new record and tell us what they are about…
Andrew: Sure…

Proliferation – Draws on the themes of nuclear war, disease and the spread on the human race. The lyrics talk about reaching a point of unsustainability for mankind.

Denature – Bit of a nerd term here. Technically it refers to the unfolding of proteins, but we retooled it to mean the removal of life from the planet.

Systematic Reduction – THE TERMINATOR SONG! Machinery and programming designed to kill and destroy, you guessed it, everyone! Are you noticing a pattern yet?

Restless – Occasionally we like to go a bit deeper and discuss how fucked the mind can be. This song talks about insanity, from the point of view of insanity. Mental illness is pretty metal when you think about it.

The Fading Light – Another song about the end of the world. Were just not a very positive bunch of guys. Nothing out of the ordinary on this one, but it does feature a guest appearance from The Obelisk.

Civil Unrest – One thing that’s pretty fucking annoying is the fact that the masses hold the power. The strength in numbers of the working class and the poor should scare the fuck out of the world leaders, and spark some pretty drastic changes to how things are done. This song isn’t supposed to incite riot or violence, its just a message saying “hey, maybe you should all.. you know.. riot?”

Hellbent – An oldie but a goodie. Not the Bill Oddie kind of a Goodie, more of a Graeme Garden… A simple song about demonic possession resulting in violent and generally anti-social behaviour.

Bloodlust – It isn’t a thrash metal album if there isn’t a song about mercilessly killing people on it.

Cross Contamination – Religion. Where would we be without it? Considerably better off is what we think, and this song is about the spread of religion and indoctrination by means of torture, rape, murder, etc.

Means To An End – Figured we would finish the album with a message of hope, and discuss how close we are to ending as a species, and all we have to do is reach out and grab it. We can do it people!

MM: So why do you want to do this? What attracts four guys from all the way out in Australia to the ‘band life’?
Andrew: There was something about working 2 full time jobs, and never having any time or money that really appealed to us. We do this because we love doing it! Never really imagined it would lead us anywhere, but things are going pretty well at the moment so we will see what happens. Any excuse to leave Australia during the summer is a good enough reason to do anything, so were going to have so starting booking some January/February tours…

’Proliferation’ is out now on Metal Blade Records