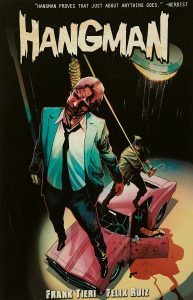 The idea of a masked avatar of justice, a costumed hero punishing the guilty on behalf of, and for those, innocents failed by the legal facets of the system is an enduring literary and cinematic trope. And it’s one that I’d like to think that I have more than passing familiarity with, as the idea of someone fighting for the underdog appeals to my core ideology. However until I read Hangman, I wasn’t familiar with the long and storied history of the central character, but thanks to sterling and informative introductions and afterword’s by Alex Segura and Steve Niles, I managed to sort of rectify my personal glaring omission and fill in the minuscule blanks that were left about, and surrounding, the character after I finished reading Tieri and Ruiz’s updated tale of the dark avenger and the horrors that follow in his wake.

The Hangman, in this incarnation at least, is a damned soul sent back to Earth to claim, and punish the souls, of those individuals judged to be beyond redemption. Think of him as Heaven’s hitman, sent out to do the big guys dirty work and make sure that Hell is kept busy and eternally full, while working toward clearing his personal slate and keeping his soul from joining the legions of the damned. It’s a fantastic pulp idea that embraces the roots and history of the character and one that’s violently and brutally supercharged for a modern audience by its author.

Tieri’s story of an ice cold mob hitman being blackmailed into taking over the role of his murderer by none other than Satan himself isn’t for the faint hearted, squeamish or easily offended. Hangman is a non-stop, high octane roller coaster ride filled with blood, guts, gore and more, that hints at a war for control of hell and whose central protagonist couldn’t care less about saving his soul and plays fast and loose with his loyalty to his “employers”. That’s part of Hangman’s allure, the fact that it’s “hero” is an unscrupulous and utter bastard who’s disregard for morality and the lives of anyone bar his immediate family is refreshing and compelling as it refuses to acknowledge, deal with or embrace any of the usual “superhero” stereotypes.  And the other highlights of Hangman that should ensure you bump this book to the top of your pull and need to read lists? Well, they’d be the thoroughly engaging and riveting story and the grim, grainy and meticulous art of Felix Ruiz that serves as the perfect medium for telling, and as a companion to, Tieri’s story. Who knew punishment could be this much fun? Tim Cundle