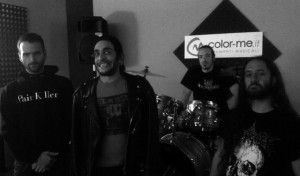 Selfmadegod Records is proud to announce the signing of Italy’s death metal/grindcore bandHAEMOPHAGUS to release the new full length in summer 2016.

Songwriting and lyrics-wise “Stream of Shadows” takes a step towards weirder, faster and more lunatic structures. With themes ranging from the Buddha’s spiritual resistance against demons, people trapped inside flippers and dystopian tales of rebellion and mind expansion, the band is trying to bring its brand of death metal, grindcore and thrash to a different level of musical oddity.

As soon as there is finished material will share first song from the album.

HAEMOPHAGUS hails from Palermo, Sicily in Italy and have been around since 2004 playing horror obsessed death metal/grindcore influenced by early CARCASS, REPULSION, AUTOPSY, TERRORIZER and the likes. The band has under its belt two full lengths and tons of vinyl-only splits with bands like AGATHOCLES, SPIRAL, GRIND CRUSHER, BONESAW, REPUKED, SUBJUGATION, MAUSOLEUM. The band’s line-up consists of past and current members of such bands as ASSUMPTION, GRAVESITE, MORBO, UNDEAD CREEP, REPULSIONE.