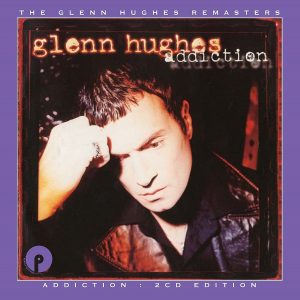 Looking at the cover art it would be hard to believe Glenn’s fifth solo outing Addiction was a hard rock record, let alone that it is at times bordering on heavy metal. Originally released in 1996 it is most definitely Hughes’ heaviest solo album, both musically and thematically as it takes a dramatic step away from the more soul and funk sounds of previous releases. The likes of Madelaine sees Hughes really push the vocals, hitting notes not unfamiliar to his classic Purple era. And with the entire album focusing seriously on a much harder rocking feel, for many this will be placed as one of his strongest releases. Period. Tagged with three bonus live tracks (one from each supergroup) it’s a comparison of how good the critically acclaimed ‘Voice of Rock’ really is. Strong and stable. Disc 2 includes a thirteen song performance recorded live in Holland during ’95 (just before the Feel album was to be released) and portrays the upbeat frontman and his band in fine rockin’ form delivering Trapeze and Deep Purple splattering amongst the set list. Hughes is a master of many guises and Addiction is the crowning glory of his hard rock persona. The booklet present with this double disc re-issue details the ‘hows’ and ‘whys’ as to what was going through the business and his mind during that period. Addiction is an essential piece of the jigsaw.  Mark Freebase