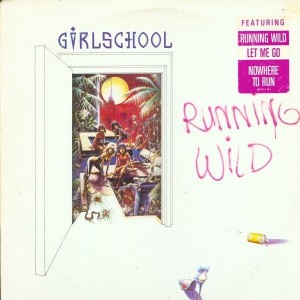 Girlschool – Running Wild CD (HNE Recordings/Cherry Red Records)
With the increase in popularity, once again, for Britain’s favourite all girl band and NWOBHM stalwarts, it seems a fitting time to introduce the album which may barely be owned by diehards. An album some may never know existed… as previously only available in the U.S. as vinyl, ‘Running Wild’ didn’t get the deserved attention similar to previous offering ‘Play Dirty’. Still without a doubt a heavy imprint of the Girschool punk-tinged heavy metal, although the entirety of the album is most definitively carrying a more commercial feel; maybe this was the cause of the albums illusiveness? Here the band sound on fine form, all be it with a slight different edge (possibly due to only two original members remaining), but ‘Running Wild’ remains a slice of classic 80’s metal. Looking back at the video for the albums title track song, one can identify the relevance of sound through the images and styles projected form that era, Girlschool were on the brink of MTV excess, quite possibly one reason why they chose to cover Kiss’s ‘Do You Love Me?’. Dip into the underlying sounds of ‘Are You Ready’ and ‘Nasty Nasty’ and its prime cut old school Girlschool all the way – not technical, but certainly no messin’. ‘Running Wild’ is a bit like rediscovering those make-up less Kiss albums from the mid-80s, uncool at the time, but on a revisit you realise you made bad judgement. Accompanied with a booklet of very fine old school pictures and clippings, and liner notes scrawled over several pages by the renowned Malcolm Dome it’s an album worth grabbing. Mark Freebase