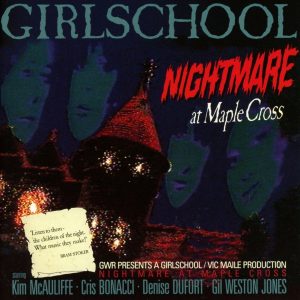 Returning with a much grittier sound than the previous U.S. radio-friendly ‘Running Wild’ and scaled back to an edgier four-piece line up once again, the English ladies were back on full form with Nightmare. With cover artwork to match the music, the likes of All Day All Night, Play With Fire and Let’s Break Up smashed home as if this record was the follow up to Play Dirty. Originally released on GWR (also at the time, home to comrades Motorhead) and never before released on CD, this re-issue thankfully comes packaged with the expected HNE glossy booklet, liner notes, and plenty of old school photos. Girlschool should have been on a home run with this album, but things were changing and getting way thrashier in 1986. Now, with the resurgence of trad-metal/heavy metal Nightmare At Maple Cross is a definite must hear record. With the band still very much active and regularly playing shows again, one can only hope that plenty of these songs get an airing during their shows. No wonder Lemmy banged on about them all the time! Mark Freebase