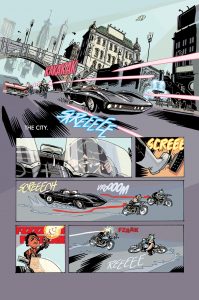 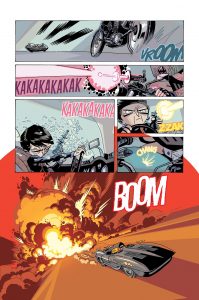 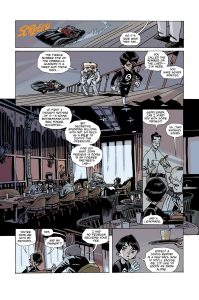 The wunderkind brood returns in The Umbrella Academy: Hotel Oblivion! Gerard Way (My Chemical Romance, The True Lives of the Fabulous Killjoys, Doom Patrol) and Gabriel Bá (Two Brothers, Neil Gaiman’s How to Talk to Girls at Parties) will return to their Harvey, Eisner, and YALSA award winning and critically acclaimed series with colorist Nick Filardi (Forbidden Brides of the Faceless Slaves in the Secret House of the Night of Dread, The Victories), and letterer Nate Piekos (Stranger Things, Briggs Land) signed on to bring more Umbrella Academy adventures to life! With a Netflix series soon to debut, the best-selling superhero series returns, stranger than ever—and our heroes’ pasts are coming back to hunt them.

The Umbrella Academy: Hotel Oblivion finds the Umbrella Academy scattered after Sir Reginald Hargreeves’ death. Number Five is a hired gun, Kraken is stalking big game, Rumor is dealing with the wreckage of her marriage, a rotund Spaceboy runs around the streets of Tokyo, Vanya continues her physical therapy after being shot in the head—and no one wants to even mention Seance until issue #2.

The Umbrella Academy: Hotel Oblivion #1 (of seven) goes on sale October 3, 2018, and is available for pre-order at your local comic shop.