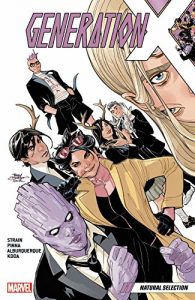 If recollection serves me the original run of Generation X back in the 90’s was a bit of a cult hit. For a short while Gen X succeeded in filling the teen mutie gap left by the New Mutants after they  finished their A-Levels and got radicalised by Cable and became X-Force.

Anyway, it’s 2018 and with the X Mansion rebranded as Xavier Institute for Mutant Education and Outreach now located in Central Park and with Kitty Pryde acting as headmistress to a school full of millennials, things have changed.

Gen X operates under the premise that not all mutants have got what it takes to be an X-Man. Some mutants just ain’t cut out to mix it up with Mr Sinister or go toe to toe with a Sentinel. Some mutants have got low level powers or oddball appearances that are more likely to get them stomped out by a hateful mob than save the world. Former Wolverine sidekick Jubilee provides the required connection to the old school and is tasked with mentoring this new generation of outcasts and losers.

This collection gathers the first six issues of Generation X and serves as not only an introduction to a new set of characters but also as an opportunity for writer Christina Strain to showcase what she can do when she’s allowed to play with some of Marvel’s more popular properties. She’s got a knack for the snappy dialogue, the back and forth between the characters is snarky, sparky and genuinely funny in places. However, I found the first couple of issues sluggish and difficult to engage with as a reader. Myriad plot lines are introduced but never reach fruition, swerving off on multiple tangents that feel messy and unresolved.

Similarly the new characters, whilst mildly entertaining on a surface level never feel fully realised. They get a couple of pages of soft focus but we never really get to know them. The enduring popularity of the X Men has always been down to the fascinating cast of characters. It’s their personal struggles, victories, defeats and relationships amidst the chaos of a world that hates them that have endeared them to so many readers. The Generation X creative team would do well to be mindful of that. Nathan Bean