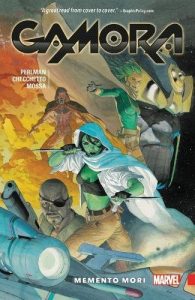 There was time, not all that long ago, when the Guardians of the Galaxy didn’t exist and its members travelled their own paths and, more often than not, left chaos, destruction and misery in their wake.  Each left their mark on the Universe before they were forced together and in Memento Mori, in the days before she, Quill and company bumped into each other, Gamora finally avenges the massacre of her people at the hands of the Badoon by assassinating the entire Royal Family as it gathers to mark the death of the Badoon Brother Royale and the ascension of his supposed heir to the role. Nothing is ever simple for Gamora though, not even a straightforward bloodbath and multiple homicides; and she soon learns that another secret member of the Badoon Royal Family exists, hidden away on the most dangerous planet in the Universe: A planet that’s about to fall into a black hole. But Gamora being Gamora isn’t about to let a little thing like almost certain death get in the way of her revenge and sets off to ensure that her blood feud is finally brought to an end. Remember that thing I said about nothing ever being simple for her? Well, fate plays another of its trump cards as Gamora discovers that she’s not as alone as she always thought she was, that her supposed enemy isn’t what she thought she would be and that black holes, and planets caught on their event horizon, are a lot harder to escape from than she ever imagined. And as events (and a collapsed star) close in around her, her destiny is irrevocably changed and she begins her journey down the long, torturous and difficult road to redemption.

Memento Mori, referring to the inescapable truth of all sentient existence (that we know that we’ll eventually die), is a hyper-charged, thrusters on full Science Fiction adventure in which betrayal, double cross, backstabbing and the general lack of individual moral codes and centres take centre stage as Gamora and the last of the Badoon Royal Family battle each other and try to stay alive on a world that wants nothing more than to “spaghettify’ them.  Heavily influenced by the Golden Age of Sci-Fi, Nicole Perlman’s take of vengeance, restitution and personal emancipation is nimble, full of twists and turns and unexpected (and therefore most welcome) surprises that’ll keep your mind submerged in its plot from beginning to end. Like Barberella on a heavy dose of muscle building steroids, Memento Mori punches its way directly into your cerebellum thanks to the astonishingly detailed and sumptuous art of Marco Checchetto and leaves you in doubt about who the baddest woman in all of known space really is. That’s right folks, it’s Gamora…Tim Cundle