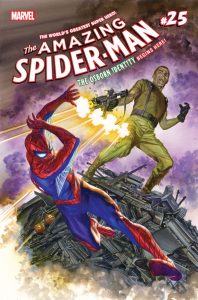 Ahab had his white whale, Holmes had Moriarty and Peter Parker has Norman Osborn.  Having fought past the point of physical and nervous exhaustion and beyond the point of all rationality over and over again, the long standing nemeses, while having faced many other enemies, have a special kind of hatred for each other that will only be fully satiated when one of them is dead. Having been pushed further, emotionally and psychologically, than he can almost bear by The Clone Conspiracy and acting on information given to him in its aftermath by the Kingpin, and seeing his oldest foe as the root cause of all his problems, Spider-Man turns all of his rage and frustration toward Norman Osborn and decides to pursue, find, and deal with him once and for all, no matter what the cost may be.  And in The Osborn Identity the price Pete inevitably ends up paying for his personal vendetta could bring everything that’s he built cashing down around him. His mission, and some would argue folly, alienates S.H.I.E.L.D., sees him leading an armed insurrection on foreign soil, plunging his company into crisis and scouring the word for the man who calls himself the Green Goblin.

While Spidey’s pursuit of Osborn is a worthy one, as crazy Norman and his new accomplice have brought a nation to its knees in their quest for wealth and power, the personal element serves a reminder that both men are flipsides of the same coin, and are at least partly responsible for helping to forge each other’s identities, personalities and the way in which they both see, and interact with the world around them. But while his quest may seem to be driven by a blinkered and singular view of the role Osborn played in creating all that plagues him, it also reminds Pete of the things that are most important to him, people. His friends and family, and the innocent masses that he’s been helping and protecting since he first became the wall crawler and even though the outcome might not be the one he desired, it’s almost certainly the one that Spider-Man needs in order to set him back on course to being the hero he was always meant to be.

Using Pete as the implement of his own inevitable destruction and allowing another of his long standing foes to slowly re-build himself and his power base while Spider-Man’s attention is elsewhere illustrate why Dan Slott’s continuing run on Amazing Spider-Man ranks among the best in the titles long history. His characterisation, dialogue and innate understanding of the relationships at the centre of Peter Parker’s life have allowed him to hone all of the players involved in the ongoing story to finely tuned, razor edge and his gift for playing the long game and slowly assembling his pieces before revealing his hand have helped to create some of the most enjoyable and entertaining tales in Spider canon. And yes, The Osborn Identity is included in that. How could it not be with Slott in the captain’s chair and Immonen’s vivid, incredible artwork piloting the story toward its destination?  It’s everything that you could want in a Spider-Man book with the added bonus of a weird and wonderful annual spinning short strange Spidey yarns that’ll wrap themselves around your imagination and entangle it in their webs. Superb… Tim Cundle