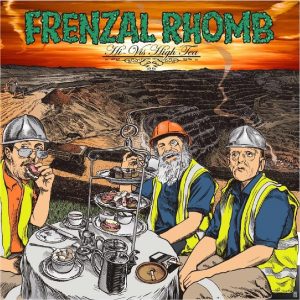 Hold on tight boys and girls, its high velocity, melodic pop punk time as Frenzal Rhomb drop their latest catchier than syphilis in a low rent dive of sexual inequity slab of sing-a-long anthem filled vinyl, wax and digital thing that lives in the ether as a bunch of complex computer code. It’s loud, it’s fast, it’s funny, it’ll make you want to sing, dance, drink beer and flip the bird at complete strangers for no reason other than the fact that they’re wearing either crocs or flip-flops. Which let’s face it means that they suck anyway.  It’s business as usual for this Aussie powerhouse as their patented brand of Ramones meets Screeching Weasel on cheap amphetamine punk rock grabs you by the bits below the waist and refuses to let go until you completely lose yourself in the good times contained in its grooves. Bloody fantastic… Tim Cundle

Frenzal Rhomb is like a packet of bubble gum. As soon as you bite into the candy you get a massive sugar rush as flavour explodes in your mouth. For a couple of minutes you chew, blow bubbles and chomp some more, munching yourself into sweet oblivion. The hit lasts for just that short period of time, leaving you with no choice but to spit out the spent gum and grab another one. But Frenzal Rhomb being Frenzal Rhomb, life ain’t that simple. You see they’ve replaced the occasional sugary blob of gum with chili pepper, designed to burn your mouth until tears start streaming down your face leaving you gasping for a gulp of something cold (Frenzal Rhomb recommend downing a can of cold beer). Anyway, these Aussie fun-punks have been promoting that recipe for well over 20 yeays now, and it’s still as satisfying as ever. The new album contains some twenty short blasts of sun, fun and frolics with the occasional middle finger raised here there and everywhere. I do love the tribute to Ray of the Hard Ons, the original Australian rude punks and no doubt a huge influence on this band. Frenzal Rhomb are one of the tried and tested Fat Wreck staples and this album adds another sweet jewel to their crown. Tom Chapman