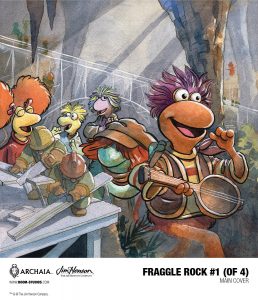 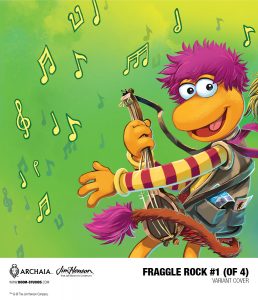 BOOM! Studios and The Jim Henson Company are excited to announce FRAGGLE ROCK #1, an all-new four-issue limited series arriving in comic shops May 2018. In honor of the 35th Anniversary ofFraggle Rock, the Fraggles are back in all-new stand-alone adventures, each by distinct creative voices and presented in an 8″ x 8″  format perfect for longtime fans to share with the next generation. It all begins with a story written and illustrated in beautiful watercolor by Jared Cullum (Jim Henson’s Labyrinth 2017 Special), as Mokey Fraggle is losing her love for creating her art and needs her friends’ help to rediscover her inspiration.

“Fraggle Rock was an exceptionally unique show where the characters were never 2-dimensional. They have authentic feelings, character flaws, and learned, as we do in life, through stumbling to the right decision in a very immersive and connective way,” said Jared Cullum. “It will always resonate with our hearts.”

“We’re proud to celebrate 35 years of Fraggle Rock with all-new stories from an eclectic group of creators,” said Cameron Chittock, Editor, BOOM! Studios. “Each issue captures the spirit of the series in an exciting way, honoring the tradition Jim Henson established of telling stories with genuine heart and a confident belief that what we share outweighs our differences.”

Print copies of FRAGGLE ROCK #1 will be available for sale in May 2018 at local comic book shops (use comicshoplocator.com to find the nearest one) or at the BOOM! Studios webstore. Digital copies can be purchased from content providers, including comiXology, iBooks, Google Play, and the BOOM! Studios app.