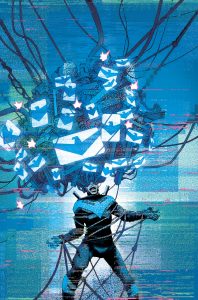 “The best way to approach NIGHTWING is as a high-octane, adrenaline-fueled mystery and adventure,” says Benjamin Percy on his new assignment writing the famous BATMAN sidekick. “I’m going to crank up the volume on that world, dose it full of steroids and poison, and dream up a digital nightmare that will ultimately impact the entire DCU.”

Beginning this May, writer Benjamin Percy will pen new stories for DC’s ongoing NIGHTWING monthly comic book series. After making his DC debut with DETECTIVE COMICS, Percy then jumped into GREEN ARROW, and has spent the last two years “happily inhabiting the disturbed mind of Damian Wayne for TEEN TITANS.”

Percy’s NIGHTWING, beginning with issue #44 on May 2, launches with a big, bold, game-changing storyline, “The Bleeding Edge,” that will lay the groundwork for a centrally important threat to the DCU. And, says Percy, “it is ironically Nightwing’s off-the-radar status that makes him the ideal detective for the case.

“Consider how Gotham and Blüdhaven are shadow-soaked, crime-ridden environments,” explains Percy. “One of the things I love about Nightwing is his irrepressible optimism. This joy—a love of the game, a showman’s theatricality—is tonally essential to my approach. I see it as a necessary counterweight to material that might otherwise feel oppressively grim. In this way, Grayson really captures the hopeful maxim that has defined the Rebirth era.”

In this arc, change is on the horizon when a new technologist sets his sights on Blüdhaven, creating a holographic, interconnected city where everyone is an individual and part of a larger network. It’s the internet made physical. Gentrification on gigabyte-laced steroids. But when this new utopia encroaches on his turf, Nightwing starts to uncover a sinister plot based not on revenge…but on a reckoning.

Joining Percy in May will be artist Christopher Mooneyham. “He’s got a tight line, cinematic vision, and can ground one moment in emotional realism and elevate the next to eye-popping levels of super-heroic awesomeness,” shared Percy.

NIGHTWING #44 :Written by Benjamin Percy, Art by Christopher Mooneyham and Cover Art by Declan Shalvey and Yasmine Putri. On Sale: 2/5.18