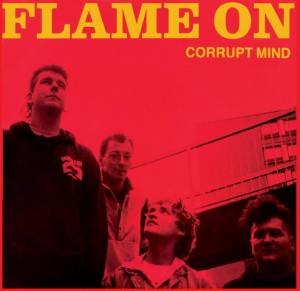 Boss Tuneage, once again, takes us on a trip back in time with this release. In the late 80s and early 90s, Stoke-on-Trent seems to have been such a hive of activity you could be forgiven for thinking that melodic punk and hardcore was poised to overtake pottery as the town’s prime export. Whilst Exit Condition were the torchbearers, Flame On was another light that shone for a brief moment before flickering out. This discography compiles their one and only release – a 7″ record that came out in 1991 on Released Emotion Records, with three demos, clocking in at a weighty 32 songs. Running in reverse order chronologically, this starts with the songs from their 7″ and these are by far the most polished recordings on here, showcasing their melodic style extremely well. All three songs are mid-paced rockers with vocal harmonies, not massively unlike some of the bands that at the time that were getting popular, such as Mega City Four or Senseless Things, but with a rougher hardcore edge. As you venture back through their demo recordings, the US hardcore influence is far more prominent, but the melodic British punk sound is also there. Once again hats off to Boss Tuneage for this fantastic addition to the Hardcore archives. Tom Chapman