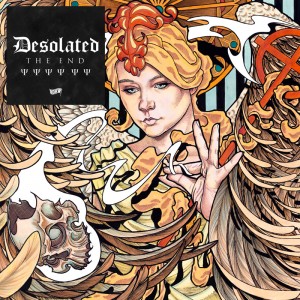 Although this UK band has been on the road for almost ten years, this is the first time I’ve heard South Coast heavyweights Desolated – shame on me. The first thing that jumps out is the Chris Panatier artwork. Another incredible piece of work from the man that created record sleeves for the likes of Pig Destroyer, Kylesa, and his own band Baroness. One thing that Desolated have in common with those bands is their love for everything heavy. However, these guys dispense with any subtleties and go straight for the throat right from the offset. Downtuned beatdown, with deathcore passages assault your senses all the way through this record. There’s the occasional nod to the older generation of bands – I’m reminded of Biohazard here and there – but The End is, by and large, a modern slab of beatdown music. A crystal clear production lifts the moshpit straight out of the speakers and into your living room. Solid release. Tom Chapman