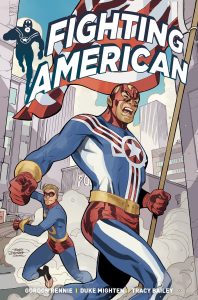 In truth, Gordon Rennie was unlikely ever to get anything approaching a 5-star review from me: see, he and I have history. But one of us is professional enough to award a fair 2.5 to 3 stars rather than the punch in the gob otherwise due. In a further concession to professionalism, I’m even willing to admit that the middling score isn’t entirely Rennie’s fault.

There’s nothing basically wrong with his reboot of Fighting American. But there is an all pervasive feel of deja vu borne of the strip’s origins and Rennie’s handling of its mythos. Jack Kirby and Joe Simon’s IP of 1954 has an intermittent history, from its initial run through various resurrections from various publishers over the years culminating in this four-issue collection of Titan’s effort from 2017, all of them – at least to date – pretty short-lived. You have to ask why.

Well, let’s let Joe Simon partly answer that. Pissed that the then Atlas Comics were relaunching the adventures of a certain star-spangled hero of his and Kirby’s creation, he said, “We thought we’d show them how to do Captain America.” And show them they did. But as much as Fighting American was their baby, he remained essentially Captain America, and there can in the final analysis be only one Cap. But a swerve was in the making anyway as Simon and Kirby almost instantly tired of hard-line McCarthy fueled commie-bashing, and reinvented the title as a lighter-hearted affair populated by a rogue’s gallery of pantomime Russkies. It’s this latter iteration that Rennie employs for his take on the title, and with a twist – that Fighting American and his sidekick Speedboy, along with Rimsky and Korsakov and Doubleheader and the rest of the pantomime baddies, find themselves by various routes transferred in time from 1955 to 2017.

It’s all fine as far it goes – a half-hour’s leisurely read – but there is really nothing new brought to the table here. Fighting American’s anachronistic mores and Speedboy’s borderline pervert ogling of a more relaxed female dress sense raise the occasional (and sometimes uneasy) smile, not helped by Mighten and De La Fuente’s art, which, while doing a fine job of capturing a kind of Kirby-lite style, so no criticism there, nonetheless occasionally slips and somehow manages to make every character in the book look like a sleazebag. I suppose the bottom line is that if you enjoy fish out of water super-hero tales, this is for you, but to my mind we’ve been there before, not only in comics but in movies such as … Captain America. Well, there’s a surprise.  Mike Wild