Warning: preg_match() expects parameter 2 to be string, object given in /var/www/vip4/sites/vip6102689/httpd/htdocs/wp-includes/formatting.php on line 4866
 Fafhrd and the Gray Mouser: The Cloud of Hate and Other Stories – Dennis O’Neil, Howard Chaykin & Walter Simonson (Dark Horse Books) - Mass Movement
x
Spread the love 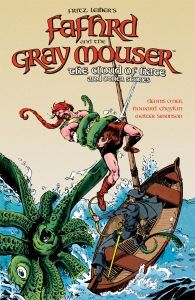 First appearing in the intervening period between the time Conan first strode the plains of Cimmeria and Elric embraced Stormbringer, Fafhrd and the Gray Mouser, while not as well-known as their more famous literary brethren, share their place at the top of the fantasy genre food chain. Created by one of the founding fathers of -and coiner of the term – “Sword and Sorcery” Fritz Leiber, Fafhrd and the Gray Mouser were an unlikely duo of heroes: a hulking barbarian who excelled in swordplay and an ex-apprentice magician turned thief well known as the most accurate, and fastest, knifeman in the ancient world. But theirs was a partnership that worked, as their paring brought together the disparate elements of the genre; the brutal savagery of combat and the shrewd, sharp intellect necessary to evade capture, enact vengeance on their foes and inveigle their way to victory by fair means of foul. And the fact that Leiber was a great writer and knew how to spin a tale or two didn’t hurt either.

The Cloud of Hate and Other Stories is the first trade collection of the Leiber stories that Dennis O’Neil adapted for the comic book medium in the early nineteen seventies. In terms of style, plot, feel and pace, it shares a lot of common ground with Marvel’s Conan adaptations, and Chaykin, Simonson and Milgrom’s art inhabits the same brightly coloured, vibrant world as Barry Windsor-Smith’s early work on the aforementioned Marvel series. The stories are fast moving and fluid, the heroes facing all kind of monsters, strange priests, magicians, pirates and buxom wenches in their ongoing quest to keep their bellies full of ale and their purses full of gold. If you haven’t read Leiber’s books, then you’re definitely in for a treat, as Fafhrd and the Gray Mouser, while incorporating all of the genre’s archetypes and expected tropes in their action packed adventures, also places their odd-couple relationship and often fractious banter centre stage, which helps to establish – and adds depth to – the characters while they’re knee deep in their enemy’s entrails and the gore of slain monsters. And if you’re already a fan, then you won’t be disappointed, as O’Neil and his artistic partners in this incredible endeavour went far above and beyond the call of duty when they adapted Leiber’s stories. Fantastic fantasy… Tim Cundle