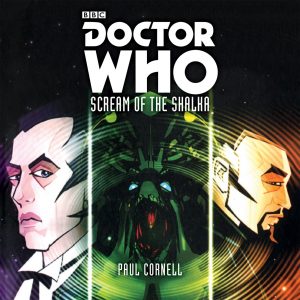 The TARDIS materialises in the village of Lannet in Lancashire. The Doctor is angry: he has apparently been transported here against his will, and he finds the village silent. With the exception of barmaid Alison Cheney, the village’s inhabitants are all living in fear. The alien Shalka have taken up residence beneath Lannet in preparation for a wider invasion. So, despite his bad mood and initial reluctance, the Doctor finds himself having to save the world again, ably aided by Alison and an enemy who has become an ally…

Blink, and you might have missed Scream of the Shalka. Initially produced to coincide with the 40th Anniversary of the series, this officially licensed, fully animated Doctor Who story was uploaded in six weekly parts back in 2003 on the channel’s Doctor Who website. The story continued the narrative of the original television series and the oft-maligned (but actually rather good) 1996 television film. However, no sooner had it been developed than the announcement of the show’s television revival saw it hastily being shoved under the canonical carpet. A great pity, as this oddity is really something of a gem.

In the original production, Richard E Grant played the (official-and-then-suddenly-unofficial-thanks-to-Christopher-Eccleston) ninth Doctor: in this audio version the mantle is taken up by David Collings.  And he absolutely nails it. His hypnotic tones are a joy to listen to, and his ‘take’ on the Doctor is otherworldly, alien, a little cold, and (initially, at least) with something of a superiority complex. But, as with Grant in the original, he thaws as the story unfolds, and by the adventure’s end you’ll be wishing that ‘Unofficial Nine’ had been given a chance to develop.

Audio adventures also allow for the sort of depth television budgets and time constraints limit, so there is so much more to this story than the original. So if you are already familiar with the webcast, you’ll find a much more layered, nuanced and detailed version of the original here.

So what happened to the original cast? Richard E Grant subsequently went on to appear throughout the Matt Smith era as The Great Intelligence, while the Doctor’s companion, originally voiced by Sophie Okonedo, also appeared in Matt Smith’s tenure as Liz 10. Notably (and I am playing the ‘Spoilers’ card here), Derek Jacobi reprised his Shalka role as the Master in 2007.

Oh, and some bloke called David Tennant appeared in a cameo in the original Shalka as a caretaker. I wonder what happened to him?  Bex Ferriday