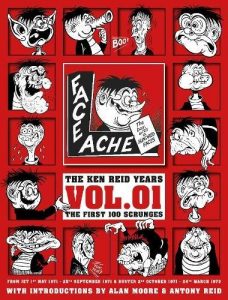 Before my infatuation with 2000AD took full grasp in the early 1980’s, I spent a great deal of time immersed in weekly comics like Buster, Whizzer & Chips and The Beano. I had never gone out of my way to pursue these titles myself, pocket money was tight and on my measly budget I could only afford one comic a week and that was always gonna be 2000AD. But after helping pack away the remains of the school Christmas jumble sale one year, my efforts were rewarded with a stack of unsellable items. A collection of knackered Commando comics and a dog eared pile of Buster comics.

A Summer spent plowing through those comics and Faceache distinguished itself quickly as my favoured strip. Ken Reid’s rubber faced gargoyle was a working class trickster, a gurning puck intent on sticking it to authority figures and rich softies alike. There was something endearing in Faceache’s underdog attitude and I gobbled up as much as I could stomach .

Reid’s pages are populated with hatchet faced teachers and burly women that resembled Les Dawson in drag. More often than not Faceache comes a cropper in some bungled scam or another, but it was the chaos his antics unleashed that I revelled in. This collection is crammed full of such hijinks and I was worried that viewing these as an adult might take the shine off my memories. Not so. Revisiting these strips some thirty years on and I’m struck by the economy of Reid’s visual story telling. His ability to create an entertaining tale within such limited space is testament to his skill as a master of the craft. His illustrations are glorious, his lines flawless, his imagination cyclopean.

As we progress through these pages it’s clear that Reid was pushing the envelope further as the years went by. The stories become more bizarre and Faceache himself becomes increasingly grotesque. Ken Reid was one of British comics genuine heroes and this volume is a fine testament to his talents and contributions. With an enthusiastic foreword by legendary mad arse Alan Moore and Ken’s son Anthony J Reid, I can’t recommend this collection enough. Fantastic. Nathan Bean