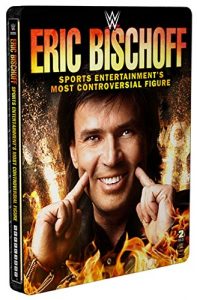 I will begin by saying that there is no more visually amazing WWE release than this three-disc set, if only because disc 1, the documentary portion, has a multitude of shots set at Eric Bischoff’s astoundingly beautiful Wyoming home.  With landscapes ripped right out of a western (including shots of Bischoff riding his beloved horses), I could keep this doc on with the sound off as background, enjoying it as a promotional video from the US Department of the Interior or Wyoming tourist board.  And I will also say that, as far as documentaries go this is a well-made telling of Easy-E’s life that seems to cover all the bases.  And in a way, that is precisely the problem.  If you don’t already know the Eric Bischoff story, then this is a great introduction to one of the most significant, unsung influences on the professional wrestling world.  As the creative force behind the WCW juggernaut in its Monday Night Wars heyday, it was Eric Bischoff’s vision and innovation which made the WWE dinosaur wake up to the twenty-first century and revamp its tired product at the end of the last century, revitalising it with “attitude” and rethinking the entire way wrestling was presented.

However, this most interesting facet of the Eric Bischoff story is well-trodden ground, seemingly covered in every single WWE release regarding those few years of notoriety that the company seems unable to let go of.  We heard it in the Monday Night Wars DVD, and on the Best of Nitro collections, and on documentaries about the Kliq, and Sting – we get it at this point!  And if we happened to have missed any of those previous releases which cover that particular portion of Eric Bischoff’s story and want to hear the whole thing – pre WCW to post WWE – well, we may have already bought Bischoff’s 2006 book, Controversy Creates Cash, or heard one of his recent interviews for free on Stone Cold Steve Austin’s excellent podcast, or seen his in-depth interview with JBL on the WWE Network (also contained on this three disc set).  Basically, Bischoff has already shared his story countless times, and there are no new revelations on this documentary – only sweeping Wyoming landscapes to accompany the same old story we’ve heard a million times before.

That is not to say the story isn’t fascinating, and if you are one of the few wrestling fans who haven’t heard it, then this collection is recommended – and you do get to see some great footage of his old martial arts days!

Beyond the documentary and Legends with JBL, the collection is more a series of moments than matches, as Bischoff is not a wrestler but more of an on-screen personality.  We get classic promos and angles that chart the career from children’s toy salesman in AWA, to WCW commentator, boss and villain, to WWE General Manager (including his excellent on-screen chemistry with Steve Austin) all the way to his infamous trial.  While many of these moments are enjoyable to re-live (and again, if you missed them the first time around they are well worth a look), they are inessential, and often quite long-winded.  Eric Bischoff was a fantastic wrestling heel — but watching clip after clip of a heel building heat without getting to see much of a pay-off from it is a tiring experience.