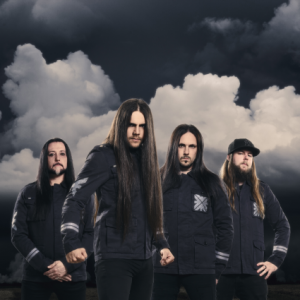 This is the band’s fourth album, produced by founder and songwriter, In Flames’ Niclas Engelin. To capture something incredible, you need to have a team enlisted to execute the vision, and Engel called upon the talents of close friends and colleagues Jocke Skog (Clawfinger) for the monstrous guitar sound design, Jacob Hermann (Top Floor Studios) for recording the Hammer of the Gods, Jacob Hansen (Hansen Studios) for mastering the Wall of Sound, and Joachim Luetke (Luetke.com) for crafting this Sinister Vision.

Engel emerged on to the world stage with the release of the critically acclaimed debut album ABSOLUTE DESIGN in 2007. THRENODY followed in 2010 overseas, and January, 2011 in North America, with the band’s third album BLOOD OF SAINTS being issued in the Fall of 2012 stateside. Engel is Mikael Sehlin (Vocals), Marcus Sunesson (Guitar), Steve Drennan (Bass) and Oscar Nilsson (Drums).

Engel‘s three albums have established the band as a force to be reckoned with in the metal community, and RAVEN KINGS exhibits the true promise the quintet has been evolving towards. Founder and principal songwriter Niclas Engelin offers, “Your definitive soundtrack to any action / mindgame ps4 game!” Guitarist Marcus Sunesson adds, “Raven Kings will bring you Salvation. The ultimate album in a perfect storm.” Engelin has a long history with In Flames, first as a periodic touring guitarist from 1997 – 2011, and now as a full-time official member of the band. 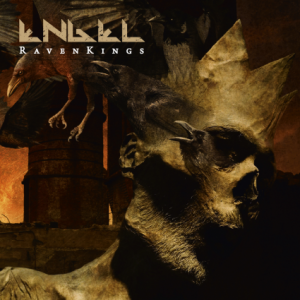 The complete track listing of RAVEN KINGS is:
“Salvation”
“Your Shadow Haunts You”
“Denial”
“Fading Light”
“My Dark Path”
“I Am The Answer,”
“When The Earth Burns”
“End Of Days”
“Sanctuary”
“Broken Pieces”
“Hollow Soul”