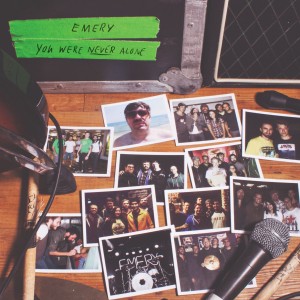 BAND TO PREMIERE A NEW SONG EVERY WEEK!

If there is one thing you can say about South Carolina’s Emery, it’s that they’ve never come close to fitting into the proverbial box. You Were Never Alone, the band’s sixth full-length record will be dropping May 19th on Rude Records in Europe. Additionally, in an untraditional approach to the rapidly changing music industry, the band chose to make fans experience each track meticulously discussed week by week on the brand new podcast Break It Down.

Each of the first 12 episodes will feature a song from the album played in its entirety along with clips and tracks pulled out from the recording session and stories and explanations to accompany as well as insights into the lyrics and themes explored. It will be a behind the curtain look at what goes into making Emery’s music. Adds Matt Carter:
“We are blown away that after going independent, recording our sixth full length, and starting our own label, BC Music, the response and new growth to our band would be so massive. It’s truly amazing to now be able to release ‘You Were Never Alone’ internationally with Rude Records and to know we have fans and support all over the world!”

You Were Never Alone is coming May 19th but not before each song will be premiered and released via an exclusive outlet once a week for twelve weeks. That’s right: you will be able to hear a new song from Emery each week up until the release.
Keep an eye on Rude Records socials to find out where you can hear a new track from You Were Never Alone each week starting NOW at AbsolutePunk.net with track one “Rock, Pebble, Stone”.