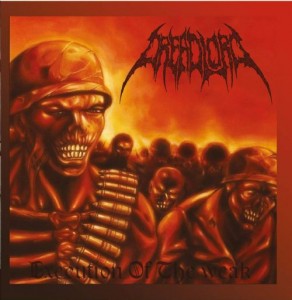 Dreadlord – Execution Of The Weak (Casket Music)
Lots of twiddly guitars, down tuned, with machine gun drums and gravel pit vocals. Good job it has lyrics with the booklet because I can’t understand a word the singer is banging on about. Dreadlord are a Danish death metal band that formed in 2005 and in true death metal fashion they write their name on the cover so it is impossible to decipher.
Never really been a fan of the deep grunting vocal style and this has done nothing to change that opinion. Some of the music is pretty good with very fast guitar riffs mixed with heavy slow ones. I’m still trying to figure out how the drummer is playing that fast unless it’s a drum machine because it is ridiculously fast for most of the time.
If you’re a fan of Carcass or Cannibal Corpse then this is right up your dark alley but cacophony is not for me really. Paul Hoddy