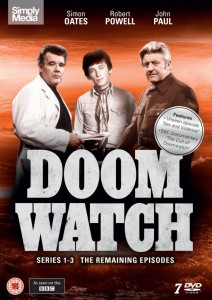 Doomwatch was a series that juggled with the affections of my teenage sci-fi self. In its one hand, the excitingly coloured balls of the apocalyptic threat of the week; in its other, the rather greyer spheres of corporate and political wrangling, and sexist shenanigans verging on the downright squirmy – yes, I’m looking at you, Doctor John Ridge. Down with this sort of thing, as Father Ted might say, and bring on the bubbling green blob! But such was Doomwatch – one moment, borderline Quatermass or Pertwee-period Who; the next … well, disappointingly prosaic for the tastes of zitty young me. So, I welcomed the chance to review the DVD box set – all surviving episodes, plus ‘extra’, from Simply Media, released April 4th – from a more mature perspective, and am happy to report that for the most part you can ignore my teenage geek and watch a juggling between hands that is pretty darned deft, so long as you can forgive John Ridge his sins.

In fairness, the Department For The Observation And Measurement Of Scientific Work’s resident action man, fashionista (cough) and self-styled chick-magnet – “she would have introduced us, but I pinched her bum just before lunch” – did get his act together eventually, as the show addressed its sexism, introducing ladies to the team, and Ridge was, after all, just a child of the times. Speaking of, it’s worth remembering that while Doomwatch premiered in 1970, it was conceived and began studio recording in the late 60s, a decade in which TV drama played fast, loose and fantastic with science, and Doomwatch’s USP was that it didn’t – just the opposite, in fact – garnering at its peak multi-millions of paranoid viewers perversely entertained by various extrapolations of their potentially imminent demise. And with good reason. People cite The Plastic Eaters, Tomorrow The Rat and, for more explosive reasons, Survival Code as memorable episodes, but I’ll ignore the obvious and shout out The Red Sky, Invasion, and Waiting For A Knighthood, one from each of the three series, as examples of damn fine coffin TV. They’re not the only ones – hours of riveting drama – admittedly, with a few duffs – await in this box set, but, for reasons beyond Simply Media’s control, fewer than should – the BBC’s ‘wiping’ policy leaving us with 24 of the original 38, and then only 10 actual studio copies rather than conversions from overseas exports others had the sense to preserve.

Where, perhaps, Simply Media is at fault, is in the somewhat basic presentation of what does survive. As well as rather uninspired menus, the episodes seem to be straight transfers, and the ‘extra’ previously mentioned is just that – the single and unlengthy talking heads documentary, The Cult Of Doomwatch, produced by BBC Scotland in 2006. It seems oddly lacking that with such a landmark release there is no mention of the film spin-off, the (excellent) attempted 90s reboot and/or something by way of interviews, photo galleries, or scripts in pdf – possibly a rights issue, but even so, they seem not to have even tried. What you DO get is the hitherto unseen episode, Sex And Violence, banned for never fully explained reasons before broadcast, but which I can tell you now does not live up to its title. Hell, no. This particular oddity comes from the sunset of the series, and its raison d’etre bemuses even the head of Doomwatch, Spencer Quist, himself. Frankly, I’d have preferred watching Colin defend his beloved computer from Mutant 60: The Plywood Eater. And so, overall – is it worth the price of admission? Yes. But you’ll be left with the feeling that the apocalypse should – and could, had saner attitudes prevailed back when – have arrived with a bit more bang. J’accuse, BBC. You killed Toby Wren. Mike Wild