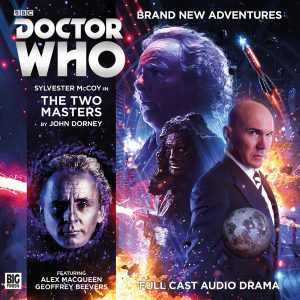 What could be worse for the Doctor than having to face the Master as all of history begins to collapse? Why, having to deal with two Masters while he attempts to prevent the death of the Universe of course, and to make matters just that tiny bit worse (as if they weren’t bad enough already), both incarnations of his oldest foe act like the worst of spoilt siblings. When they’re not trying to kill each other, they’re teaming up in an attempt to rewrite all of creation in their own image.  Two heads, in this case, are most definitely not better than one. A least, they’re not as far as the Doctor and just about every other living thing in time and space is concerned; and if the former is going to save the latter, he going to need to use every single trick he has up his sleeves (one for each of the Masters)  in order to do so.

The final act in the Master trilogy, The Two Masters, is a fantastic story that’s packed to the roundel shaped rafters with action, treachery, betrayal, sabotage, dastardly apocalyptic schemes and bang on target classic Doctor Who cliff-hangers.  The masterful (okay, I know, I should leave puns to those who are actually adept at utilising them) plot weaves its way through encounters with the Rocket Men,  the middle of one of the most devastating civil wars the cosmos has ever witnessed and inveigles the Master(s) in the final design of the Cult of the Heretic, a secret and hidden organisation whose only goal is end all of time and space and then reimagine it anew. And in-between all of these wonderful plots submerged in plots that are entangled in other plots that link the previous parts of the trilogy into an incredibly satisfying whole, and as if this story didn’t contain enough magnificent ideas, there’s a mysterious case of enforced identity swapping and further exploration of Timelord legends and mythology. John Dorney’s tale is absolutely spectacular in every sense, and Geoffrey Beevers and Alex Macqueen’s abrasive chemistry and towering performances as the continually bickering Masters are just stunning, and steal the show in grandiose, moustache twirling, and villainous style.  You know that all old saying about going out with a bang? Well, that’s exactly what the Master trilogy does with The Two Masters, as it finishes the story with an ear shattering roar that shakes the very pillars of the Whoniverse itself.  It’s just…Amazing. Yes, that’s exactly what it is. Amazing…  Tim Cundle