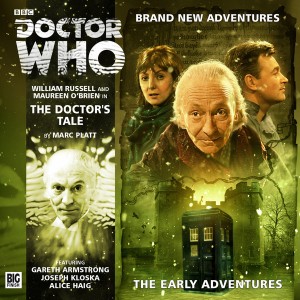 Doctor Who: The Early Adventures: The Doctor’s Tale – Starring William Russell, Maureen O’Brien, Gareth Armstrong, Joseph Kloska, Alice Haig & John Banks & Written by Marc Platt – 2xCD / Download (Big Finish Productions)
History, as has often been noted, is written, made and reshaped by the victorious. And The Doctor, who in Marc Platt’s ‘The Doctor’s Tale’ (along with Ian, Barbara and Vicki) travels back to the early days of Henry IV’s reign following the overthrow of Richard II, making this story that most glorious, and lamentably underused classic Who staples, a historical adventure.

Cut from the same cloth as ‘The Crusade’, ‘Marco Polo’, ‘The Reign of Terror’ and ‘The Aztecs’, ‘The Doctor’s Tale’ see’s the crew of the Tardis become embroiled with Queen Isabella’s search for her husband and entangled in a plot to destabilize the new King; all the while becoming the arch-enemies of the newly installed Archbishop of Canterbury and his henchman, before finally solving the mystery of what really happened to Geoffrey Chaucer. They soon discover that the roads followed by the pilgrims and their masters are filled with danger, deceit, treachery and death and that trust is commodity bought and sold for the smallest amount of coin by the most corrupt of men. But with a little luck, knowledge and a lot of courage and ingenuity, even the darkest of days can be overcome, even if history itself can’t be changed, a lesson that they learn in the hardest of ways as they desperately attempt to escape with their lives.

As I’ve already mentioned, ‘The Doctor’s Tale’ is a historical drama, and it’s resemblance to the aforementioned serials is uncanny. It feels as it could have been written during, and actually belongs within the first two seasons of the show. Marc Platt’s story gradually evolves through character driven narrative and action that combines fact and fiction in a thoroughly engaging tale from a largely forgotten era of classic Who. Thoughtful, interesting and funny, ‘The Doctor’s Tale’ may at times be a little slow for a modern audience raised solely on the twenty first century re-emergence of ‘Doctor Who’, but for those of us raised on the exploits on the First, Second, Third and Fourth Doctors, it’s wonderful reminder of how good Who used to, and can still, be. The past isn’t as foreign or as far away as we’ve been led to believe. At least, it isn’t when The Doctor’s involved… Tim Mass Movement