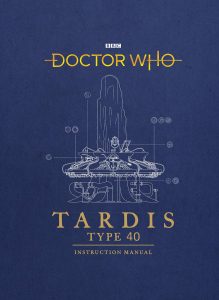 It’s a gorgeous idea, the Type 40 Instruction Manual. It’s a chance to really wallow in the wonder that is the Tardis, with millimetre-perfect drawings of the current ‘outer plasmic shell’ – that’s Police Box to you – as well as a history of other versions of the box, the ‘desktop theme,’ the individual consoles and console rooms, and any number of other bits of doohickery. There’s a cut-away diagram of the dematerialisation circuit, for instance, and some beautiful shots of a range of Tardis interiors, including several of the Doctor’s, plus things like the Rani’s Tardis (in a detail it’s difficult to appreciate from its in-action appearance in The Mark of the Rani), an ‘archived’ Tardis interior design (from an eventually abandoned attempt to revive the show), and even the full-colour interior of Missy’s Tardis.

So – gorgeous idea, full of lush detail and images to simply sit and stare at for hours. Big Time Lord tick.

It’s padded out with two main ‘types’ of content. On the one hand, there’s the fiercely geeky premise of it actually being an Instruction Manual, taking the tone of something designed to make you familiar with all the particularly important parts of ‘your’ Tardis, advising on how some things work, and how they should never ever be forced to work – usually with reference to the way the Doctor has made the Tardis behave at some point in the show. It explains the outer plasmic shell and the rules controlling its use and change, the inner plasmic shell (mostly roundels, to you), and with the aid of some particularly intriguing technical drawings, the inner workings of your central console. This is all the kind of thing that full-on Who geeks will eat up with a trans-dimensional spoon – just the sort of thing to keep us quiet on a Christmas Day which has become a desert in the absence of a Christmas Special. In addition to which, dotted perhaps a little too frequently throughout the book, are panels and boxes detailing the Tardis-centric events in the Doctor’s Tardis’ life. These are re-named as particular incidents or files, like The Frontios Incident, The Idris Incident etc. While they draw the focus away from the geeky technical details of how the telepathic circuits work, how to troubleshoot your Tardis and how the ‘corridors of eternity’ (I kid you not) can be re-arranged, jettisoned and generally beggared about with, there’s a determined focus in the writing to make these story-recaps more than just story re-caps, and to drag some Tardis-specific details of the stories, with the part it plays, the damage it suffers and so on being placed front and centre, which gives an oddly refreshing view on the stories related. Yes, this is the point at which the book most feels like a rehash of things most fans already know, but there’s enough dedication to the concept of the instruction manual in the writing of these recaps to make the reader go along with them and smile.

One thing this book won’t do is replace your Technical Manual from the 1980s. It doesn’t have the size or the scope to give you technical drawings of every model of Cyberman and Dalek or any such stuff alongside its Tardises – but crucially, that’s not what it sets out to do, and it puts enough creative effort into its Tardis-focused narrative that you won’t feel short-changed in the slightest. Plus of course, it leaves the way open for future volumes to deliver the history and technical specs of Daleks, Cybermen and the like.

This Instruction Manual is all Tardis, all the time, and the result is a compact but richly detailed trip through the systems, components, workings, themes, in-show explanations and adventures of your favourite time machine. It’s a jewel for your bookcase, and unlike some tie-in books, it’s one you’ll find yourself thumbing through in the future, even once you’ve read it all, for the images, the drawings and the explanations behind some of the Tardis’ more impressive and miraculous actions. Tony Fyler