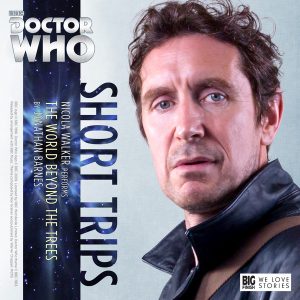 Doctor Who: Short Trips: The World Beyond the Trees – Written by Jonathan Barnes & Performed by Nicola Walker – Download (Big Finish)

Kicking off the seventh series of Big Finish’s Short Trips is Jonathan Barnes’ bittersweet story The World Beyond the Trees. It stars Nicola Walker reprising the role of erstwhile spaceship medical technician and Seventh and Eighth Doctor companion Liv Chenka and proves to be something of a rare breed.

At first glance, it seems to be a simple enough tale – but I’d suggest that it’s actually something completely different. I’ll explain more about that in a minute, but first, let’s tackle the story. We’re in the Doctor’s house in Baker Street, London, in the 1970s. Liv wakes up one day to find herself alone. The Doctor has vanished and fellow travelling companion Molly O’Sullivan appears to be in a catatonic state, along with the rest of London. Confused, Liv ventures outside and meets a stranger; someone who wants to get home. The stranger has a message for her and for someone else, someone who is so very far away.

But here’s the thing. Liv’s story isn’t actually for us. She’s telling it to her father. Her dead father. And that’s what I mean when I say that this is something completely different. Yes, on one level it’s a well-paced and genuinely gripping story about aliens and inert citizens in England’s capital city, but on another it’s a story about how Liv has dealt – or rather, not dealt – with the death of her father.

Author Jonathan Barnes tackles the concept of grief beautifully and with a lightness of touch that only someone who is really, really good at writing can pull off, while Nicola Walker excels, as always, in the role of Liv Chenka, her approach to this story complimenting Barnes’ script beautifully. She breezes through the script with considerable ease, brings both main characters to life whilst making them feel very different, but also brings a real vulnerability to both. And that grief she is feeling bubbles just below the surface throughout without once threatening to take over and cause the story to lose its pace or magic: now that is the sign of a good actor!

I urge you to dedicate half an hour of your day to this story. It’s a beautiful piece of writing, and it fully deserves your time. Bex Ferriday