Warning: preg_match() expects parameter 2 to be string, object given in /var/www/vip4/sites/vip6102689/httpd/htdocs/wp-includes/formatting.php on line 4866
 Doctor Who: Return to Telos - Mass Movement
x
Spread the love 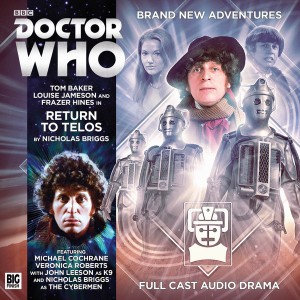 Doctor Who: Return to Telos – Starring Tom Baker, Louise Jameson, Michael Cochrane, Frazer Hines, Veronica Roberts, Nicholas Briggs & Bernard Holley & Written by Nicholas Briggs – CD / Download (Big Finish)
Even if I hadn’t already been pulled into the previous adventure, ‘The Fate of Krelos’, then I’d have been hopelessly drawn to ‘Return to Telos’. Why? Because it’s set on Telos, which means that it’ll involves Cybermen, and much as I love the Daleks, The Master, the Sontarans and all of the Doctor’s other major league foes, as far as I’m concerned, baddies don’t come much badder than the Cybermen. However, before being overcome by cyber-fever, you really need to listen to ‘The Fate of Krelos’, the previous story, first or you’ll end up scratching your head and muttering ‘What? What? Just what is going on…?’ before becoming hopelessly lost as the plot rapidly picks up pace and jumps from place to place and from one time to another. As you’ve probably already guessed, ‘Return to Telos’ is the second part of the finale of this series of the Fourth Doctor’s adventures, and it’s got a lot to live up to as the opening act was a masterclass in slow-burn, gradual build drama. Luckily it does live up to that promise; in spectacular fashion.

The plot is a thrill packed affair, full of time and planet hopping, that see’s the Fourth Doctor and Leela revisiting one of his ‘classic’, previous encounters with the Cybermen in order to save a civilisation from being conquered, consumed and obliterated. It’s a tale driven by guilt, as The Doctor realises that it was his fault that events were originally set in motion sending him back to Telos, where, he manages to change history, cross his own timeline (which as we know is a big no-no), battle the Cybermen and the “traitor” in his midst before finally making it back to Krelos for a slap-up fish supper. ‘Return to Telos’ is a frantic, fiendishly well-plotted story that’ll leave long-time fans of the series grinning from ear to ear, as The Doctors, much to my (and I’m sure everyone else’s as well) delight, face the inhabitants of the tombs of Telos and do what they do best. Which is, of course, save the day and save the Universe. And that ladies and gentlemen, is how you finish a series. Now if you’ll excuse me, after all that excitement, I think I need to lie down for a while, give my nerves a chance to recuperate and all that… Tim Mass Movement