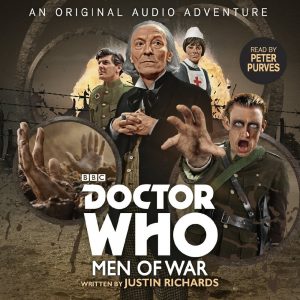 Quite why BBC Audio decided to start its new series of one-hour audiobook short Doctor Who adventures with a Fourth Doctor story based on characters from the Nest Cottage Chronicles rather than the TV show is anyone’s guess – possibly, it was to consolidate that BBC-specific Fourth Doctor audio audience for the new range.

Men of War though feels like the real start of the new range, going back to the First Doctor’s time, and bringing us an adventure set during the off-screen segments of The Daleks’ Master Plan. Arguably, it’s a risky strategy, because, like The Thing From The Sea with the Fourth Doctor and Mrs Wibbsey, you have to have a degree of chronology at your fingertips to get the most from stories set in that particular window of time, with Steven Taylor and Sara Kingdom on their way to do clever things with Taranium and stop the Daleks before they can destroy the fabric of time.

Nevertheless, while it helps to know where in the series chronology you are, especially as regards to Sara Kingdom’s personal timeline, Justin Richards is a writer who knows his stuff, and when he drops us in to the Somme in August 1916, there’s story enough to be getting along with right here, thank you very much. Because the battle of the Somme should be raging…but it isn’t.

Instead, something else is happening. Men are being snatched from their trenches by night, snatched by hands coming out of the mud, and dragged away, never to be seen again.

Creepy stuff on two levels, then – why is history not going on the way the Doctor insists it ‘should’ be? And what is taking the soldiers, and why?

Given the First Doctor’s recent TV return and involvement with the events of the Christmas Armistice of World War I, there’s something of a companion-piece feel to this story of the Somme, but this is the Doctor long before he reaches his moment of regenerative doubt in Twice Upon A Time, before he sees his own future and realises the difference one life can make in a conflict of millions. Necessarily then, this is a First Doctor with more vim and bite, more certainty in the importance of the Bigger Picture, to the extent that here, he harangues Field Marshall Hague into beginning the Somme campaign immediately, pushing men to the slaughter of that ghastly, bloody battle, because he feels the Bigger Picture needs them to die there and then and in the horrible ways that battlefield could give them.

As the story progresses, there’s a sense that he may have a point, and there’s a Sapphire and Steel nod to the nature of the enemy that’s taking the soldiers from their trenches. But there are also some beautiful moments with Sara Kingdom and Captain Mark Steadman, the World War I soldier who’s our narrative window into this story, as they share their stories, their sins, and their darkest fears.

There’s also a crystal clear moment of pure Doctoring, as, having identified the problem, the First Doctor, so old and yet so young in his adventuring, prepares to lay down his life to defeat a danger that might, if left unchecked, spread from the silent Somme into the wider universe, consuming life at every point. As it happens, there’s Something Clever that can be done to avoid our hero having to sacrifice his life on the battlefield, but that he sees the danger and is willing to step into its path is a wonderful moment of Doctor Who (which grows more wonderful still when you compare it with the Sixties sexism of the First Doctor in Twice Upon A Time).

The set-up of the drama in this story lends itself to listeners guessing what’s going on in at least one direction pretty early on, but there are still a solid handful of mysteries to ponder as we go through this story. Why has the Battle of the Somme not started when the Doctor thinks it should have? Will whatever is empowering the mud of the Somme be stoppable, and if so, how? Who or what is behind the non-battle? And late in the story, it reserves a whole other level of punch to hit us with, making use of the Doctor’s inability in his first incarnation to accurately pilot the Tardis, meaning just knowing that a problem exists somewhere isn’t enough to let him go there and deal with it.

Who-fans will get a shiver of possibility when they find out what’s happening, and the dangling threads it leaves for other Doctors to pick up later in the run. There’s very definitely a resolution to the immediate problem in this story, but there’s a sense that something bigger is afoot, and that the Doctor is as yet powerless to confront that larger scheme.

Peter Purves, who played Steven Taylor on TV, has been playing both Taylor and the First Doctor in audio stories for some years now, and he’s a joy to listen to here. There are a few moments of disconnect at the very start of the story, because Richards’ story is told in the first person, but not the first person of either Steven or the Doctor, so having Purves tell the story leads to a jump in the groove of your brain when he names his viewpoint-character as Captain Steadman, and you could easily assume that Steven has gone undercover on the front line until Steadman recounts his meeting with the pilot. But Purves’ reading style is inviting and inclusive, and soon it’s easy to forget that Peter Purves the reader exists, as he draws you into the characters’ voices and their story on the Somme.

Men of War is a cracking listen, and sets us off on what feels like a multi-Doctor adventure that could well build to some enormous consequences later in the run of these new BBC audio adventures. Pick it up and remind yourself of the charms – and the occasional necessary bleakness – of the First Doctor.  Tony Fyler