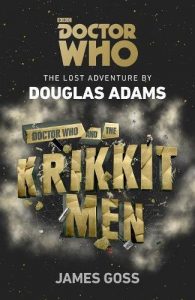 There’s something terribly appropriate about Douglas Adams, that great recycler of ideas, having the bones of one of his very first Doctor Who stories turned into this, his final Doctor Who story, almost two decades after his untimely death.  Even better, it’s a story he successfully reworked as book three of his Hitchhikers series, Life, the Universe and Everything.  He’d have appreciated both the irony and the circularity, you can’t help but think.  Nothing goes to waste, and a good idea’s worth having twice, after all.

But is it worth reading twice?

Well, first we need a bit of background and context.  In this particular instance, the good idea first popped into Adams’ head in the late 1970s, and made up part of his initial failed pitch of a Doctor Who movie (alongside his more immediately successful Pirate Planet script for television).

Where it went from there – and how it ended up here, in this reader’s sweaty palms – makes up the bulk of the book’s appendices, which chart co-author James Goss’ Indiana Jones-like search through the BBC Archives for the famous ‘lost’ Adams Who story (and yes, I am starting at the end.  Seems appropriate somehow).  To be honest, I’d have liked to see more of Goss’ engaging chat about raking through the Adams archive at Cambridge University  – literary archaeology is always interesting, and Who and Adams doubly so.

But that might conceivably have taken some attention from the novel itself and that would be a travesty.  Because this is a joy from beginning to end.  Goss’ previous Adams’ novelisations (‘City of Death’ and ‘The Pirate Planet’ in case you – bizarrely – didn’t now) were good, solid works, with a decent amount of jokes, and some spot on characterisation of the two leads.  This though is a whole other level of goodness.  Whether it’s the inclusion of actual chunks of Adams’ original prose (not that I could tell where Adams ended and Goss began) or the relative unfamiliarity of the plot, ‘Krikkitmen’ and its tale of the universe’s greatest and most deadly xenophobes, breezes along as smoothly as anything from – to take a completely random example – Hitchhikers Guide to the Galaxy.

Beginning rather cleverly as a sort of interactive virtual reality tour inside the Matrix (complete with subtitles in the sky), this would never have worked on an old-school BBC budget (or even as a BBC financed movie) in 1979, but that’s the point (or one of them) really.  This is very much a story which would work today, and I have no problem at all imagining the new series making this as a slightly more expensive than usual Special.  Worlds whizz by, timelines are jumped willy-nilly and through it all the Doctor and Romana (plus tin dog sidekick) gad about in amusing bursts of frantic activity.  It’s a modern story, with a modern feel to it, and for all Adams’ undoubted genius, a lot of the credit for that must surely got to Goss.  Even the things he leaves out (not many, to be honest) turn out to be best discarded.  I admit to a slight pang on hearing that the book was to feature Romana not Sarah-Jane, but Goss makes a good case for doing so and even provides an additional extra in which he shows exactly why it wouldn’t have worked.

It probably doesn’t need spelling out, but I’ll do it anyway.  Yes, even if you love LTUAE and know and cherish every plot twist and mad idea in it, this is enough of a different book – and enough of a triumph in its own right – to be worth reading twice.  Three times, even… Stuart Douglas