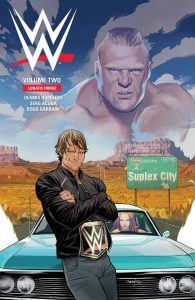 Move over Seth Rollins*, it’s time for Dean to bask in the spotlight,  soak up it’s rays and shine like a nuclear powered lighthouse summoning any and all challengers to get between the ropes and take him on where it matters. In the square circle.  Lunatic Fringe is the story of Momma Ambrose’s** baby boy taking the reins of destiny and supercharging them with V8 ambition and drive and the need to prove himself against all challengers, smash through the glass ceiling and reach for the one thing that every single wrestler in the WWE wants. A shot at being champion.

And that’s exactly what he does with a little help from his fellow road warrior, friend and travelling companion Sasha Banks, who teaches him a thing or two about life along the way, a favour he in turn reciprocates. On paper they may seem like the very definition of the odd couple, but in the four colour universe (and almost certainly on WWE TV) their strange, but endearing partnership works perfectly.

Like all things in the Wrestling world, Dean and Sasha’s journey isn’t exactly straight forward and between their ongoing feuds with “The Beast” Brock Lesnar and Charlotte Flair, they also find themselves caught up in a pseudo-Texas Chainsaw Massacre style nightmare instigated by Bray Wyatt and his family. Except this way out there like Pluto, slightly bonkers scenario involves monster trucks instead of the chosen weapon of tree surgeons the world over; and while it may seem a little odd to non-Wrestling fans, it captures the fun, insanity and outrageous spirit of the Attitude era, and enforces the idea that anything can happen on the road and in the WWE.

Someone*** once said that the best way to get over with a crowd and on television was to be yourself. Blow everything that makes you, well you, up by a factor of ten, but always be yourself. Because if you try to be something that you’re not, the fans will know; they’ll sense it, smell it and see straight through it.  And that’s what Dennis Hopeless does in Lunatic Fringe. He takes Dean Ambrose, the character that we all know from TV and turns him to up eleven, amplifying everything that he is while sticking to his history and following his journey through the ranks of the WWE and every line of dialogue, interaction and plot development is written with passion and a flair that highlights the writers genuine love of the business that he’s documenting. That love of Professional Wrestling also shines through every panel of Acuna and Lattie’s pencils and Graback’s colours, as they bring Ambrose, Banks and their foes and allies to bruising life in order to tell Hopeless’s story. Ring the bell and make the call, because the inmates really are running the show and Lunatic Fringe is not only a sure fire knockout, it’s also a humdinger of a tale. Hooray for crazy… Tim Cundle

*The subject of, and major player in, Volume One.

** Yeah, I know Ambrose isn’t his or his mothers real name. But I don’t break Kayfabe. And neither should you.

*** I’m pretty sure it was Jim Ross, Steve Austin or Vince McMahon.