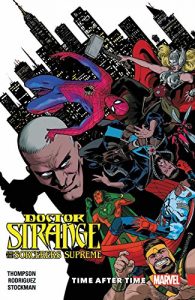 And now the end is near as the Sorcerers Supreme face the final curtain… At least, that’s how it seems as Time After Time begins with Isaac Newton, reading from one of the most powerful books in creation, The Word of God, and attempting to summon the “creature” responsible for writing said book. Engaging in his suicidal spoken word act in the middle of Central Park attracts more than a little attention and as the combined forces of the Sorcerers Supreme and the Avengers attempt to stop him, the author whose attention Isaac has been trying to get, appears.  Which rains on everybody’s parade, as the Lovecraftian monstrosity from way out in space and beyond time becomes absorbed by, and obsessed with, reclaiming its tome, burning the world to cinders and snuffing out any and all “Earth Meats” who get in its way. As opening chapters go, Robbie Thompson’s Time After Time takes some beating and the further into the story you get, the better it gets, as it throws Howard the Duck and Stephen Strange’s team together in a pan- galactic, trans-dimensional battle between science and magic with the fate of billions of lives at stake.

Thompson, it would seem has been dipping his toes into magical circles and practising what his heroes preach, as in Time After Time he indulges in the art of literary prestidigitation and misdirection, making his audience believe that the story is solely about the aforementioned confrontation and conflict, when in reality it’s about so much more.  It explores ideas of acceptance, faith and belief, both in oneself and the path that fate pushes each of us down, the interconnection of individuals and the parts that we all play in each other’s lives and incorporates a delicious swerve or two that switches the stories emphasis from one character to another and then another, which thanks to some incredibly clever plotting and planning will make you smack your forehead while exclaiming “Of course! How did I not see that?” Ending, rather unfashionably, on a high note, Thompson’s exhilarating story of good triumphing (for the time being) over darkness and everyone getting what they truly deserve, not only looks fantastic thanks to the artists supreme Stockman and Rodriguez but it also provides a couple of hours’ worth of magical, good old fashioned, high velocity, four colour escapist fun. And who doesn’t love that? The Doctor will see you now… Tim Cundle