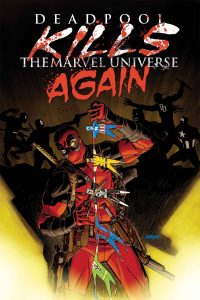 Who do you call when you absolutely, positively have to kill every hero in the Marvel Universe? Why, Deadpool of course. Except, you can’t let him know that’s what you want him to do because, he’s at that stage in his life when he’s trying to do the hero thing and turn over a new leaf. This leaves the big bad who’s ultimately responsible for killing the Marvel Universe with quite a conundrum.  How can you make the merc with a mouth go double fruit loops crazy homicidal when he doesn’t want to? Well, it seems that there’s a way around every problem and an answer for every dilemma, because as Deadpool Kills the Marvel Universe Again begins, superheroes have started dying in all manner of horrible and grizzly ways.  And considering that costumed folk don’t usually die, it doesn’t take a genius to figure out that there’s a superhero serial killer at large (whose identity, thanks to the books title, we already know) and before you can say “Did you know that Steve Rogers is the secret leader of Hydra?”, there’s a team of streetwise savvy vigilante’s (including Moon Knight, Frank Castle, Misty Knight, Cable, Jessica Jones and more) on the trail of the hero murderer.

Thing is, even though we know that Wade’s up to his waist in the innocent – and not so innocent –  blood, guts and gore of the superhero community, he only sort of knows what he’s doing. Why? Because he’s the victim of a secret mind control, and programming, imitative that’s been dreamt up and enacted by a cabal of the worst scoundrels and blackguards in the Marvel Universe. With his, already broken, mind turned inside out and upside down and triggered by a specific verbal commands, Deadpool is sent out into the world to do what none of them ever could. Wipe every hero from the face of the planet and level the playing field in the cabal’s favour. Except nothing is ever that easy or straight forward and Wade, fighting what he’s been commanded to do like some sort of semi-psychotic Jason Bourne, gets a little help from his “friends”, which unfortunately comes just a little bit too late to turn the tables in this fatally funny, and tragic tale of end of the Age of Heroes.

Cullen Bunn and Dalibor Talajic have, with Deadpool Kills the Marvel Universe Again, proved that they’re the dynamic duo (hey, if DC can poach Bendis, I can appropriate one of their catchphrases. So there) when it comes to creating Deadpool’s deadly and, for Wade and everyone around him, disastrous adventures. The former writes up a storm, mixing potent characterisation, a fast moving and insanely enthralling storyline with witty, cutting dialogue while the latter serves up a concoction of deliciously detailed artwork that balances the gritty events that occur at, and by, Deadpool’s hand with the cartoonish and oddly charming wanderings of Wade’s imagination. Filled to the gills with brutal violence, this race against time, catch Wade of you can thriller embraces and runs with the idea that Deadpool is the doleful, forlorn clown of the Marvel Universe, who thanks to his powers and a touch of evil mastermind style mental jiggery pokery, finally becomes the last man standing in the Marvel Universe. Murderously good… Tim Cundle