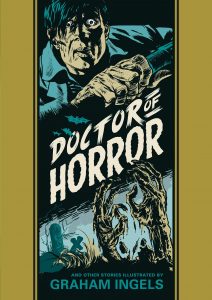 Confession and hold my hands up time, for I did not immediately recognise the name Graham Ingels. But I did recognise the name “Ghastly” – that particular appellation, for any reasonably au fait comic fan who lurked around the newsagents and market stalls of old, has resonated down the decades as much as the names of the Old Witch and the Crypt-Keeper themselves. “Ghastly” was not ‘your host’ as they were, mind, but granted the epithet – unusually for a creator – for the singular artistic vision he brought to many of EC’s cowboy, crime and, later and especially, horror titles. Ghastly was one of the talents who drew the nightmares.

Now, Graham Ingels gets his own volume in Fantagraphics Books’ EC Library. It seems oddly late in the day to devote a volume in this long-running series to an artist who was with the company since its early years, but better late, etc. Within this showcase of his work lie 29 tales from titles such as Crime Suspenstories, War Against Crime, Haunt of Fears and Tales From The Crypt, written by EC stalwarts Al Feldstein and Gardner Fox, with a couple of adaptions of short stories by Ray Bradbury and Edgar Allan Poe. The latter, Blood Red Wine, offers a neat twist on The Cask Of Amontillado.

It’s all pre Comics Code Authority stuff, and therefore offers Ingels plenty of opportunity  to splash the flesh and gore, perhaps not so much with his cowboy tales – Smokin’ Six Guns!, The Saga of Spotlight John – but it gets more than bloody enough when the book hits its stride with Heads-Up,  A Snapshot of Death and many more imaginings. There are strange scientific experiments, love-triangle betrayals and vengeants from beyond the grave, and coffins … lots and lots of coffins.

I’ll admit here and now that I’m not particularly keen on Ingels’ style, but it is undeniably unique, and it sweeps you into the dark world of comics that existed before the industry had its talons clipped.As with all titles in the EC Library, the tales are bookended by present day observations of one kind or another, in this case an introduction to each tale by Thommy Burns, chronicler also of the work of Wally Wood; an overview of EC’s ups and downs by Ted White; and finally, an Ingels biographical piece from S.C. Ringgenburg. It’s a knowledgeable and comprehensive package, and Fantagraphics Books, as always, deliver it with quality and care. Mike Wild