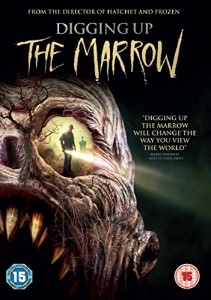 Digging Up The Marrow (Kaleidoscope)
A truly independent lo-fi effort, with only half a dozen people involved in total, ‘Digging Up The Marrow’ is a monster film made by monster film fans for monster film fans, and proves that you don’t need to throw a huge budget and the kitchen sink at a movie to make it effective. Built around the fact that real-life director Adam Green gets all sorts of bonkers communications and offerings from fans of his other films (Frozen, the Hatchet series, the Holliston TV series etc.), including some amazing artwork of original monsters by Alex Pardee, it extrapolates a premise: what if he went to meet one of these fans who claimed to have found a doorway to an underground metropolis beneath a local cemetery where these monsters actually exist (cue some huge nods to Clive Barker’s Nightbreed)? With the film presented as a behind-the-scenes documentary, Adam Green gets to play himself on screen, and there’s many an amusing in-joke referencing his other films. The opening scenes are at a monster fan convention, so we also get cameos from Kane ’Jason Voorhees’ Hodder, Tony ‘Candy Man’ Todd, and even, an especial treat for thrash fans, Oderus Ungerus from GWAR (RIP) who declares poignantly that he has always been a monster, and always will be a monster, even when he’s dead. The film builds slowly, with a great agitated performance from Ray Wise as the dubious monster expert, and there are several well-timed scares along the way. The budgetary constraints are apparent when you finally meet some of the monsters, but accept it in the spirit that it’s intended, and this is a really fun, goofy horror flick, destined for the same sort of late night cult status as ‘Bubba Ho Tep’ etc. And the thirty-minute extra feature, showing how they painstakingly brought Pardee’s artwork to life through sculpture, is almost as enjoyable as the film itself. Ian Glasper