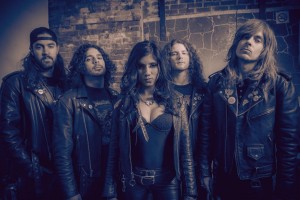 Calling downtown Toronto their home, but crisscrossing the continent for weeks on end, armed with little more than their brand of original hard rock, their gear and a dream: DIEMONDS have recently signed with Napalm Records and today they unveil the first details of their brand new album ‘Never Wanna Die’, set to be released worldwide on September 4th 2015!

“Stoked to be a part of the Napalm family, ready to unleash our proudest and most exciting album to date,” states guitarist C.C Diemond.

With their 3rd album ‘Never Wanna Die’ the band continues to modernize their heavy rock n’ roll sound. This time, multiple Juno award-winner Eric Ratz (Monster Truck, Billy Talent) is in the producer chair. Remaining true to their sound, DIEMONDS takes lyrics that speak to the outcasts, wild children, and misfits, and combine them with a hard-hitting live show, taking cues from the greats they look up to. Priya Panda, the band’s front woman, is the sultry singer that the music world has been waiting for. With her larger-than-life presence, she breaks every cultural, social, gender and sexual boundary known to hard rock. If the ever-growing legions of the band’s loyal following are any indication, DIEMONDS are firmly carving their own path in music and hoards of rock fans are already along for the ride.

DIEMONDS have now unveiled the stunning artwork as well as the track listing for their hotly anticipated album ‘Never Wanna Die’: 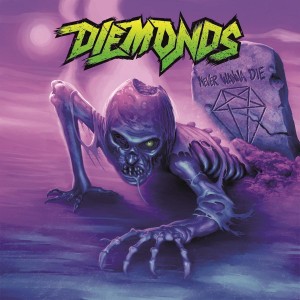 Never Wanna Die Track Listing:
Never Wanna Die
Hell Is Full
Over It
Ain’t That Kinda Girl
Secret
Better Off Dead
Forever Untamed
Wild At Heart
Meet Your Maker
Save Your Life
To celebrate the upcoming album release by Diemonds, the band presents a lyric video for the track ‘Over It‘”!

Pre-order your copy as well as the exclusive limited Vinyl edition of ‘Never Wanna Die’ here:
USA & Rest of the World