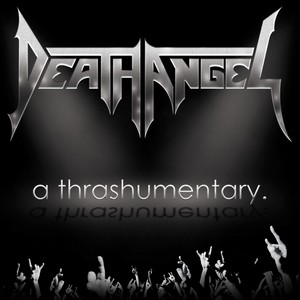 Death Angel – A Thrashumentary (Nuclear Blast)
Death Angel is no stranger when it comes to recording their life on the road and in the studio. Of course there’s the live DVD ‘Sonic German Beatdown’, but their three latest albums each included a bonus DVD with either live recordings or ‘­making­ of’ documentaries. ‘A Thrashumentary’ fits that tradition perfectly. In fact this is the one DVD that you should watch before any of the others, as it’s about the history of one of the best Bay Area bands. Truth be said, it’s ALL about Death Angel and not about the genre as a whole which the title might imply. Anyway, all of the killer albums are discussed chronologically, first and foremost by the ‘backbone’ of the original line ­up guitar player Rob Cavestany and singer Mark Osegueda. There stories get enhanced by the other band members and lots of other people from the ‘industry’ like Scott Ian (Anthrax), Chuck Billy (Testament) and Andreas Kisser (Sepultura). There’s also original footage through the years, much of which is of ‘bootleg’ quality, which just adds to the flavour. What I actually think the best part is, and what has taught me a lot about the core of Death Angel – and possibly life in general – is how the band created ‘Act III’ and the terrible accident the band was in, which almost took drummer Andy’s life. That also led up to the split, which caused the band to disappear for a long long time. Apart from that, music is the keyword, and all albums, and bands like The Organization and The Swarm, get talked about extensively and all fans of the band will thoroughly enjoy this. Let’s not forget about the killer live album ‘The Bay Calls For Blood’. A complete package of this GREAT band. Martijn Welzen