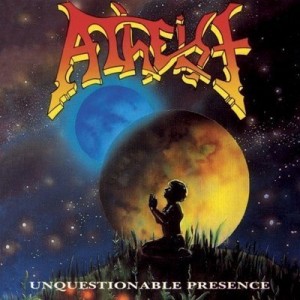 Atheist – Unquestionable Presence (Season Of Mist)
Things are always a lot clearer in hindsight, and Atheist has cleared up two important things for me personally. In 1991, at a young age, I had other things on my mind than listening to delicately woven yet viciously brutal music which was equal parts thrash and jazz. Now I understand that ‘Unquestionable Presence’ was just a masterpiece. I have also fully understand the impact the band must have had on acts like Death, Pestilence and Cynic also looking for that special edge to make their music become legendary. That is not all which makes this record a must­-have. It’s also the musical legacy of Roger Patterson, an amazingly talented musician who died in 1991. Roger wrote a large part of the insanely original music, but unfortunately didn’t record any of it on the original release of ‘Unquestionable Presence’. That is where this re­issue becomes a testament to Roger’s talents, as this version includes demo versions of several songs with him playing, which are just amazing. These have so much power you cannot image they are just demo recordings. Season Of Mist even went above and beyond by adding a DVD which features a live performance from 1990 and other interesting bits and pieces. Martijn Welzen