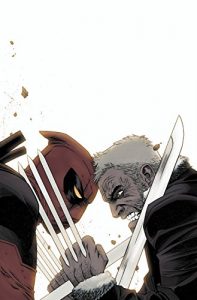 It had to happen. With Wade being forced to revert to type following the events of Secret Empire and making the number one spot of the ten most wanted, sooner or later, it was inevitable that he was going to start running into, and bumping heads with, his former comrades in arms in the superhero community. And first on the list, is the future, and even grumpier, version of Wolverine*, Old Man Logan, another product of the same Weapon X program that gave the world Deadpool. So as first encounters go, it’s a pretty even match. Or at least it would be if Wade wasn’t certifiable and had retractable adamantium claws, but he does have guns, katana’s and can-do will slay-for-pay gung ho attitude, so it isn’t an entirely one sided snikt-snikt festival of death.

Showing up on each other’s radars after they discover, and separately decide to save by doing things their own way, a mutant who’s being hunted by mercenaries employed by a rogue corporation, Deadpool and Logan find themselves at loggerheads and trying to tear strips off one another as they fight amongst themselves and battle numerous heavily armed henchmen in an effort to do the right thing. However, when the whole rescuing thing goes horribly wrong thanks in no small part to the ego driven machismo of the would be saviours, Logan and Deadpool  team up in order to recover the mutant who has fallen into corporate hands despite our heroes best efforts.  Like most things in Wade’s life though, the whole saving the hideously powerful damsel in distress thing doesn’t go according to plan and isn’t exactly straight forward as the would-be partners in heroics confront the fact that they might have got this one slightly wrong and that they may have mis-read the situation. Which is when all hell breaks loose.

Unlike the stars of their story, Shalvey and Henderson do work well together and dare I say it, have the makings of a perfect partnership. Shalvey understands that his main players are broken, deeply flawed individuals who bring more baggage to the table than the cargo hold of C-130 and he utilises this in order to have them feed off and fuel each other’s actions throughout while Mike Henderson draws up a storm and pushes the narrative forward at a breakneck pace with his intricately detailed art. Deadpool vs Old Man Logan is everything that you want, and expect, it to be. It’s crammed full of wonderfully brutal violence, snappy one liners, involving dialogue and carefully constructed characterisation and it’s all built around the kind of plot that grabs you by the collar on page one and pulls you through the tale, before depositing you in a bruised, battered and wholly satisfied heap at the end of the last page. Who knew that mayhem and destruction could be this much fun? Tim Cundle

*I know Wolverine was dead and you know he was dead. But wibbly-wobbly, timey whimey, alternate reality and Earth comic stuff beats us hands down and that’s the reason Logan is here. Just accept it and move on. I do. And yes, I know Wolverine has now clawed his way back to the land of the living and returned from the grave. It’s kinda cool isn’t it?