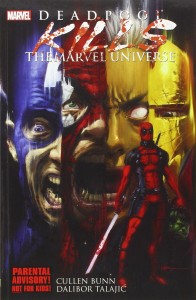 What if, and bear with me on this, all of Wade’s crazy is what’s actually keeping him in check? What if his raging insanity, the constant stream of voices and ideas that flow unchecked through his cerebellum, are the only things that allow him to maintain a fragile hold on his, and that of all the heroes around him, reality?  If that were the case, imagine what would happen if someone, who governed entirely by self-interest and an overwhelming desire to conquer this, and every other, world, tried to “cure” him, and in doing so stripped away everything bar the cold, clinical, overwhelming madness that allows our “hero” to see the truth of his surroundings? Then imagine that Deadpool, the one fed by a singular, driving voice urging him to break free of the constraining embrace of his “world”, was let loose, and the only way for him to escape was by killing everyone and everything that made his Universe what it was, and is? Sounds kind of scary doesn’t it? Scary, but, you know sort of fun at the same time. Well folks, that’s exactly what happens in the fourth wall shattering, ultra-violent, darkly humorous and murderously delightful Deadpool Kills the Marvel Universe.

Finally taken to a psychiatric facility (by Charles Xavier and his X-Men)  to be given the care he needs, Deadpool finds himself at the mercy of the Psycho Man, a would be conqueror who’s attempt to brainwash everyone’s favourite mercenary backfires spectacularly and transforms him into a homicidal machine driven by one overwhelming desire. Kill everyone and everything in the Marvel Universe. Which is what he sets out to do, and in an inventive orgy of explosions, gunfire, swordplay and gratuitous brutality, Wade wipes the Marvel slate clean. Filled to bursting (which, funnily enough, at one point, is what happens to Wade’s head) with first rate characterisation, compulsive dialogue and an unrelenting plot that circumvents expectation, Deadpool Kills the Marvel Universe does exactly what it sets out to do. It kills everybody except Wade. Cullen Bunn, with more than a little help from his partner in crime Dalibor Talajic, takes Deadpool on a journey unlike any other and in doing so, is granted ultimate power over the Marvel Universe, and with the aid of an arsenal of hideously creative and ingenious methodology, does what few writers have been permitted to do. He kills everyone. But what’s a “hero” to do when everyone is dead and he still has murder on his, admittedly demented, mind? Why, then it’s time for the monster flee his prison and turn on his creators, and in a brilliant and so-Deadpool-it-couldn’t-possibly-be-more-Deadpool curtain closing finale, he focuses his attentions on everyone, everywhere. One, two, Wade’s coming for you… Tim Mass Movement