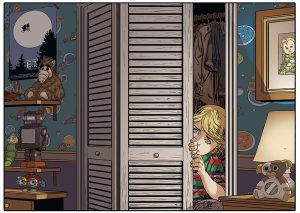 To stop a murder, would you become a murderer?

Troubled pilot Fred Martin is caught in a bizarre storm and loses control of his aircraft. Martin awakens unharmed, only to discover that he is thirty years in the past with the impossible opportunity to right the wrong that ruined his future. But to prevent murder, will he commit murder?

Written by Richardson, creator of The Mask and Timecop, and illustrated by Guzmán, Echoes is fantasy drama on a human scale, a provocative journey into how the past is always present.

*Richardson’s 47 Ronin, illustrated by Stan Sakai, was named in the top ten in the 2015 YALSA Great Graphic Novels for Teens list.