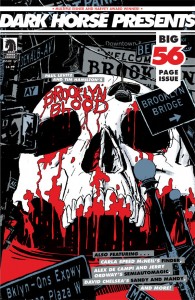 The Harvey Award winning anthology series from Dark Horse is still going strong in its fourth incarnation, even though officially, it’s labeled as volume three. So for a series that’s been around since 1986 and about to hit the 30 year anniversary as of next year something must be going very right. With stories such as Concrete, Sin City, and Next Men by creators such as Paul Chadwick, Mobieus, Frank Miller, and Bernie Wrightson included in its history it’s easy to see why it has lasted for as long as it has.

The main feature in #17 is the premiere of Brooklyn Blood by Paul Levitz and Tim Hamilton about a war veteran turned detective with bad PTSD, Bill O’Conner, who’s somewhat quiet night gets interrupted by a murder in Prospect Park which could turn into something more than a normal killing. Up next The Suit: Contract Negotiation Chapter Two by Dennis Calero followed by Last Act Chapter 3 where a superhuman contemplates the world coming back together for one last time by Shawn Aldridge and Julius Gopez. Finder, by Carla Speed McNeil, has Rachel fully understanding that she has nothing except her friends. Sandy and Mandy by David Chelsea, finds our title characters still not having any luck with their clients, with both walking away less than fulfilled. And Semiautomagic and Dreamgang both finish up their current storylines. As usual, per Dark Horse’s anthology comic is a very solid issue featuring beginnings, middles, and ends that, as it always does, makes you want to see what’s in store next. Jason Bonton