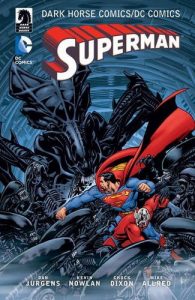 The nineties were an odd time. Looking back at what is getting on for summat like twenty ruddy years ago now, there was great excitement as the franchise building films of the eighties gave way to crossovers of said franchises. Alien’s Xenomorph did battle with everyone. Predator, Batman, Tarzan all grappled with acid blooded space menace and so, inevitably then did Supes. The first half of this monster volume documents both of these titanic tussles and, well, it’s fun but, as is often the case predictable. The idea of the vicious and ultra efficient killing machine that will wipe out an entire race given the opportunity, and in this post Prometheus world, we know that is exactly what it’s purpose is, against the unstoppable force that is Superman is a tantalising one. Throw in the just as super New Gods and their warlike ways and the dust up to end all dust ups is on!

Part One introduces the Last Son of Krypton to the Alien menace and the first thing that stood out for me, before we even get on to the plot details, were the fashion choices the artists have given our cast. Lois is all clicking heels, smart suits and shoulder pads, the epitome of late 80s corporate toughness that lasted well in to the next decade. There’s women with short, sharp hair does and sunglasses everywhere! Superman is the usual square jawed all American hero, but, saints preserve us, he has a mullet! Fashion horrors aside, the story gets going pretty quickly and an SOS message from some long lost Kryptonian outpost has been discovered. The crew of the Nostromo … erm, sorry, Lexcorp and Superman rush to the rescue to find, well, you can probably guess if you’ve seen Alien.

Lead roles in action movies where going to tough women around now (Sigourney Weaver et al) and this is reflected in the trio of women wrapped up in the monster mayhem that ensues. With Lex out of the picture, Cheryl Kimble is the face of corporate nastiness and spars with Lois throughout. Upon arrival at the devastated Kryptonian outpost, a certain blonde haired youngster named Kara is the last line of defence against the extra terrestrial menace. There are no damsels in distress in the 90s! It’s the damsels who are pulling the strings. All of this is good fun and the tale takes us where you’d think it would with the usual Alien antics before Part Two sees Supes reunited with the acid blooded baddy but this time in the midst of (another) war between Darkseid and the New Gods. Imagine if Darkseid could harness the power of the face hugging, chest bursting killing machine that is Alien and set it loose on New Genesis! Well, that’s the plan and only Superman and a host of New Gods, Godesses and Godlings stand between him and ultimate victory!

Back when these books were first published, the sheer excitement of “Aliens vs Superman” was enough to carry them. There’s bright and brash imaginative artwork and characterisation aplenty – especially in the second chapter – but both tales suffer the same fate that many Superman (and, to be fair, most superhero tales) suffer. That is that they are predictable. You may want that I suppose, you may like the fact that everything turns out nice in the end, that insurmountable odds are somehow overcome but since then we’ve had much, much darker tales thrown at us on TV, in cinema and on the pages of comic books. I’m really busting a gut not to give anything away here but one of the staples of the Alien movies is you get infected that’s it. You’ve had yer chips. There’s always someone gets a face hugger clinging to their chops and slinging the baby alien down their gullet. We then can have a poignant moment or a noble sacrifice but the key characters getting “aliened”? Well, that’s not gonna happen unless you want the ultimate downbeat ending (Unlike many critics I like Alien 3!)  … or cop out. I’ll say no more but the writers bottling it turns what should be a dark tale brighter. I like the dark …

Next up then and a complete change of pace and a most surreal and impudent slice of weirdness from the tail end of the 1990s with Superman and the Madman Hullabaloo and what a hullabaloo it is! In a real throwback to the golden days of comics, a bizarre experiment goes wrong, as they always do, and the result is that Superman is “spliced” with Madman from some parallel world where everyone lives in that colourful 50s Americana-verse that may or may not have really existed. Both Supes and Madman then explore each other’s worlds, bodies, friends and costumes(!) while foiling bad guys and attempting to sort out the mess that has thrown them in to a bizarre world of pop art and oddness. After the face hugging and chest bursting carnage of the first half of the book, this change of tone is a very weird one and apes the style of a bygone age with impish glee.

Talking of Apes, the book concludes with a what of tale, kind of like the Elseworlds type idea that has seen Big Blue as Big Red in Soviet Russia or thrown in to the American Civil War to spruce up the story telling potential. What if then, baby Kal-El crash landed not in Smallville but deep in the jungles of Africa and was raised by Apes? Supertarzan romps around his jungle kingdom in a Victorian caper (from the turn of the 00s) full of pirates, cads and zeppelins but doesn’t quite engage as the previous three quarters of this loosely themed compendium does. Now if Superman had met Tarzan … that may have grabbed my interest more.

The best way to view these tales of crossover chaos is as a trip down memory lane, if not for the story telling, then definitely for the aesthetic. From a time when franchises collided and, well, if the story was any good, that was a bonus. Marv Gadgie